Czech inflation up to 6% y/y in November 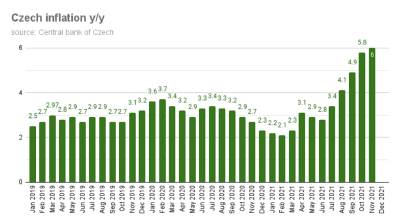 Czech inflation rose to 6% year-on-year in November, up from 5.8% posted in October, below analysts´ expectations (6.2%),  shows data published by the Czech Statistics Office (CSO).

The rate was mostly influenced by growth in transport prices, which rose by13.5%.

“Year-on-year price growth came mainly from prices in transport. Prices of motor cars increased by 7.4% and fuels and lubricants for personal transport equipment by 32.8%. E.g. petrol Natural 95 was sold for about CZK37 per litre at petrol stations in November, which was the highest value since October 2012, so the highest in the last nine years,” noted Pavla Sediva, head of the CSO Consumer Price Statistics Unit.

Inflation accelerated further, significantly exceeding the upper boundary of the tolerance band around the Czech central bank´s (CNB) target. Consumer prices adjusted for the first-round effects of changes to indirect taxes increased by 7% y/y in November.

“Consumer price inflation in November was around 1 percentage point higher than expected by the CNB’s autumn forecast. As in October, the deviation of observed inflation from the forecast was due mainly to accelerating core inflation. Within core inflation, the contribution of imputed rent is gaining further in strength,” said Petr Kral, Executive Director of the CNB's Monetary Department.

"In light of rising inflation concerns, the November price change is good news. However, it looks more like a temporary calming of the wind ahead of the coming storm in January," said Deloitte chief economist David Marek.

According to him, the waiver of VAT on electricity and natural gas had a major impact on inflation. "This is a temporary intervention effective in November and December this year. This measure took one percentage point off the November inflation," he added.

In month-on-month, consumer prices in November went up by 0.2%, mainly due to higher prices in transport and in food and non-alcoholic beverages, and on the other hand from the waiver of VAT on electricity and natural gas prices.

Pavel Stepanek, Fondee's chief economist, expects the rise in energy prices to be fully reflected in inflation in the coming months and said it was questionable how long this effect would last.

J&T said the inflation trend is stronger than expected by the CNB and will put pressure on the bank board to continue raising interest rates. On 22 December), interest rates could be raised by 50 points to 3.25% and hikes will continue at the beginning of next year too, it said. "The latest data increase the chances of a sharper tightening of the monetary policy than expected until now."

The CNB forecast expects inflation to rise significantly at the end of this year and approach 7% during the winter early next year, driven by a further increase in core inflation, reflecting significant domestic price pressures and strong producer price inflation on domestic market and abroad.

Inflation is expected to gradually fall in the course of 2022, as a result of a prior significant increase in interest rates, followed by a decline close to the CNB´s 2% target over the monetary policy horizon, i.e. in late 2022 and early 2023.