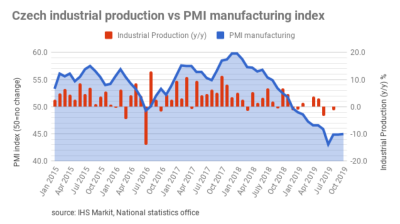 Czech PMI still down in October at 45, well below the 50 no-change market
By bne IntelliNews November 5, 2019

Despite a slight increase in IHS Manufacturing Purchasing Managers Index (PMI) in the Czech Republic to 45.0 in October from 44.9 in September, the data signalled a further deterioration in the Czech manufacturing sector health, led by substantial contractions in production and new orders, according to IHS Markit data released on November 1.

Any figure greater than 50.0 indicates overall improvement in the sector.

Production has fallen across the manufacturing sector for the eleventh month in a row. “The Czech manufacturing sector remained firmly in the doldrums at the beginning of the 4Q19, with overall operating conditions deteriorating strongly. The decline was underpinned by further marked decreases in new business and foreign client demand,” said Economist at IHS Markit Sian Jones.

The firms had to cut their workforce numbers at the quickest pace for almost a decade in October, mostly due to lower production requirements, efforts to cut costs and smaller client demand.

As Jones put it, “most worrying was a worsening picture across the labour market and forward-looking indicators. Firms registered the fastest decline in employment for almost a decade and business confidence turned negative for the first time in almost seven years. Lacklustre sales volumes and reports of little sign of improvement in demand in the coming months drove pessimism.”

A decline in domestic and fireign demand led to a decrease in new orders and new export business. The companies expressed the lowest degree of sentiment in terms of future output since 2012. They expect production to fall in the next 12 months amid sustained contractions in domestic and foreign demand.

According to Jones, the firms also highlighted a challenging environment for those in the automotive industry, and the knock-on effects of weakness in the German manufacturing sector.

Turkey sees unexpected rise in inflation as lira weakness pushes up prices
23 hours ago
Russia's services PMI bounces back to 35.9 in May from a record low of 12.9% in April, but business still contracting
1 day ago
Easing of lockdowns offers hope to emerging Europe’s COVID-struck economies
2 days ago
Kazakh manufacturing ekes out PMI expansion in May
2 days ago
A third of Russians are ready to participate in a mass protest against falling living standards
2 days ago