Czech PMI remains at its lowest level in a decade 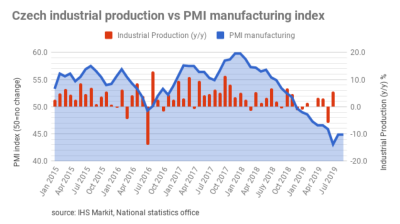 Czech PMI remained at its lowest level since 2009 of 44.9 in September, the same as August
By bne IntelliNews October 2, 2019

Czechia’s IHS Manufacturing Purchasing Managers Index (PMI) remained at its lowest level since 2009, at 44.9 points in September, the same level as it posted in August, making it the tenth consecutive month of contraction, according to IHS Markit data released on October 1.

Any result below the 50 no-change mark is a contraction.

Operational conditions in the manufacturing sector continued decreasing sharply, with a slight decrease of the rates of contraction in output and new business. “The PMI stayed at one of its lowest readings since July 2009. There was some let-up in the severity of the decline, however, as the rate of contraction in output and new orders eased slightly,” said Economist at IHS Markit Sian Jones.

Output charges decreased further due to pressure from customers to discount. Cost pressure are reported to remain quiet as input prices increased at the second-slowest rate in the past four years.

“Hard data from the industry doesn't indicate a decline yet, but the slowdown is noticeable. While the Czech industry grew by 6.5% in 2017, 3% in 2018, 2019 year-to-date average growth has reached just 1%,” said ING Chief Economist Jakub Seidler.

The companies reported a muted foreign demand conditions with new export orders going down at a steep pace. The firms reported that decline of clients ́ interest to place orders reduced new business inflows. “Subsequently, firms reduced their workforce numbers at the fastest pace for almost a decade. Many stated that employment declined following the non-replacement of voluntary leavers,” Sian added. Spare capacity was further reflected in a sustained drop in backlogs, IHS stated.

"Business confidence was also subdued amid tough external demand conditions, ongoing trade wars and weakness across the automotive sector. IHS Markit currently forecasts a weak performance in the goods-producing sector in the third quarter, as supported by the PMI, with growth momentum expected to pick up in the closing months of 2019," Sian noted.

“According to the “soft” leading indicators, the situation in the Czech domestic industry remains relatively uncertain this year, despite the fact that statistics from the real economy are still relatively favourable,” Seidler stressed, adding that if the global industry and trade remain under pressure, it will sooner or later become more apparent in the Czech real economy figures.