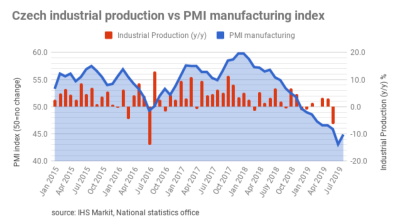 Czech August IHS Manufacturing Purchasing Managers Index (PMI) finally increased after months of deterioration to 44.9 points, the lowest level in a decade, up from 43.1 in July, according to IHS Markit report published on September 2.

However, even the reversal of the declining trend left the index below the 50 no-change mark and represents a contraction.

According to the ING Chief Economist Jakub Seidler, PMIs in the domestic industry have been gradually going down since the turn of 2017/2018 when they reached 60 points. Manufacturing industry performance in August has interrupted the series of consecutive drops, which Seidler considers good news, but at the level below 50 points PMI still signals a marked deterioration of conditions in the domestic industry.

The overall contraction was the second-fastest since 2009, driven mostly by a marked drop in new business, leading partly to a decline in new orders. Business confidence decreased to the lowest level for over six-and-a-half years. FIrms registered a further decline in production in August.

“Operating conditions continued to deteriorate among Czech manufacturers in August. Although the brakes applied to the sector were partially released, with the headline PMI ticking up from July's ten-year low, efforts to clear backlogs were a key factor behind a slower fall in output as new business continued to contract at a marked rate,” said Economist at IHS Markit Sian Jones, adding that export orders decreased at the fastest pace for over a decade.

The number of workers declined further in August. “Hesitancy towards future output was further reflected in a solid decrease in employment, with firms often unwilling to replace voluntary leavers,” Jones stressed. At the same time, backlogs of work decreased at a moderate pace.

“If the global manufacturing industry remains under pressure, this will sooner or later transmit into domestic figures. And the August PMI reading being negative regarding foreign demand signals that this is a likely scenario in the forthcoming quarters,” Seidler concluded.