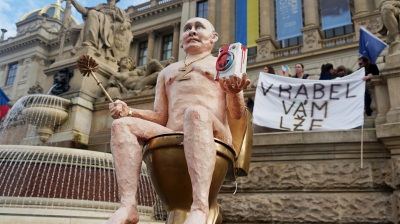 Czechs protest against Vladimir Putin and those who defend him outside the National Museum. / Tom Rimpel
By Albin Sybera November 21, 2022

Czech Prime Minister Petr Fiala will attend the Visegrad Group (V4) meeting on November 24 hosted by Slovakia, even though Parliamentary Speaker Marketa Pekarova Adamova and  Senate President Milos Vystrcil boycotted meeting their Hungarian counterparts over Budapest's stance towards Ukraine and its energy policies. The meeting is being held in Slovakia's second largest city in Kosice, not far from the Ukrainian border

Hungary is becoming increasingly isolated in the EU and among its regional allies, the V4 countries, for its more pro-Russian position in Moscow's war against Ukraine and for blocking EU initiatives to punish Moscow for its aggression and help Ukraine. These differences have rendered the regional group moribund since Russia's invasion.

But there are differing views within the V4, the Czech coalition government and even within the rightwing Czech Civic Democrats on how tough a stance to take towards Viktor Orban's radical rightwing regime.

“Hungarians bilaterally negotiate with Russia over supplies of energy commodities,” Vystrcil told local media, adding that this prevents a “united stance of EU countries and implementation of our goals in this energy crisis” and that the boycott is a “rational and sober way to express disagreement” on the V4 level. The war in Ukraine, the energy crisis and migration are key agenda topics in Kosice.

Pekarova Adamova called Hungary a “trojan horse of Russia” in line with comments of other Czech representatives such as the lower house's vice-speaker Olga Richterova from last week. “It is always Hungarians who agree with the sanction packages last” […], “blackmailing further sanctions, and they are exploiting the war themes domestically against the EU,” Pekarova Adamova said.

Fiala said he wants to discuss “common approach and common rules” on supporting the economy during the energy crisis, pointing to the German €200mn package, which “causes concern among EU member states”. In an interveiw for Czech newsite Seznam Zpravy, Fiala said that after a dialogue “Hungary supported all the key decisions during EU negotiations".

Prior to the war Fiala and Vystrcil’s rightwing ODS avoided criticism of Fidesz and maintained friendly ties with it. ODS MEP Jan Zahradil, who represents the strong conservative and eurosceptic wing within the party,  called on the EU to accept Hungarian strongmanViktor Orban after Fidesz’s flawed general election victory in April. Another MEP Alexandr Vondra, a former liberal dissident who has moved to the right, also defends Fidesz rule in Hungary.

One of Fidesz’s 1988 co-founders and the current Speaker of the National Assembly Laszlo Kover issued a press statement in which he regretted the V4 house speakers' meeting was postponed as a result of the Czech boycott.

“The remarks of the speakers of the Czech Parliament concerning our country are untrue and disrespectful,” Kover wrote, highlighting that these “do not correspond to the facts and they call into question the right of the Hungarian government to shape its policy according to the interest of the Hungarian nation”.

Czechia holds the EU’s rotating presidency and its Europan Affairs Minister Mikulas Bek chairs EU discussions over the breaches of rule of law, civil liberties, and democracy in Hungary. Last week Bek criticised Hungary for obstructing the EU’s efforts to raise cash on financial markets for a loan to Ukraine, warning it could alienate EU officials in the upcoming response to Hungary’s proposals to unlock the rule of law conditionality to gain access to EU funds.

Poland and Slovakia have also strongly criticised Hungary's stance towards Russia and Ukraine. In an interview published on November 9, Slovak Foreign Minister Rastislav Kacer (a former Slovak ambassador to Hungary) told the Slovak website Napunk (published in Hungarian) that Hungary's arguments against sanctions "seem to come from the Kremlin playbook".

"The arguments we hear from the Hungarian government are often the same as those used by the Kremlin's propaganda in its information war. I do not understand. These sanctions are in no way more damaging to Europe. Some even say they are helping Russia – if that were true, Russia wouldn't be rebelling against them. Hungary is alone in the European Union with this view and is completely isolated from its other Western allies"

Polish proposed ban on Russian rubber may give the European tyre industry a flat
8 hours ago
Prague to have a new municipal government after record-long negotiations
13 hours ago
Party congresses of Hungarian opposition demonstrate deep divisions
13 hours ago
At least 500 dead after huge earthquake hits Turkey, Syria in early hours
13 hours ago
Turkish minister tells US ambassador ‘Take your dirty hands off Turkey’ as sanctions sparks fly
19 hours ago