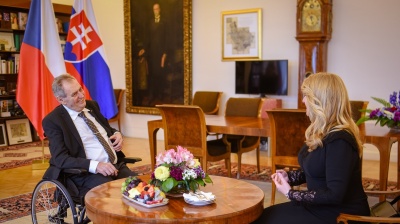 Czech President Milos Zeman has appointed three new members of the seven-man Czech National Bank (CNB) board. Following on from the appointment of new Governor Ales Michl last month, Zeman has now transformed the balance of the board, shifting it in a more dovish direction, though there will be a range of opinions on how soon the bank should start to halt and then reverse its recent rate rises.

The new board members are the current chair of the National Budget Council, Eva Zamrazilova, who was a CNB board member between 2008 and 2014, Jan Frait, the director of the CNB's Financial Stability Department, also a former CNB member (2000 to 2006),  and Karina Kubelkova, a chief analyst at the Czech Chamber of Commerce and adviser to the prime minister.

The mandate of the current CNB Governor Jiri Rusnok, Deputy Governor Tomas Nidetzky and Board Member Vojtech Benda will end at the end of June. Both Nidetzky and Benda could have been reappointed for another term but the president decided to choose new members closer to the Michl, who is expected to carry out more dovish monetary policy compared to the current governor.

"Jan Frait was one of the doves during his first term on the board, but as head of financial stability, he was instead opposed to zero interest rates and supported raising rates as soon as possible. Eva Zamrazilova was one of the three board members who opposed the FX floor in 2013 and has been cautiously critical of recent interest rate hikes in recent comments," commented Frantisek Taborsky, FX & FI Strategist at ING Bank.

"Karina Kubelkova's views are not widely known, but from what we do know, let us assume she prefers a more cautious approach. All three names are familiar with how the CNB operates, but we expect a rather dovish approach," Taborsky noted.

During the ceremony, Zeman pointed out that as well as raising interest rates the CNB has also other tools to fight inflation, which it has not yet been fully used. "What I have in mind is both exchange rate operations, i.e. operations with foreign exchange reserves, and other. But that will depend on the decisions of the new board," he said, as quoted by the Czech News Agency.

"I am very grateful to the current bank board, which recognised the nature of inflation early on and started to fight it immediately. These steps will never be popular, yet they were necessary and will soon start to be projected in the slowing inflation and the growth of the money supply in the economy. The current situation requires deeper analysis and the next step must be carefully considered," Zamrazilova said.

"I welcome the appointment of these three new board members. They are experienced professionals. I have had the opportunity to work with Eva Zamrazilova and Karina Kubelkova and I can confirm that they are a wise choice for the coming difficult period," Czech Prime Minister Petr Fiala was quoted by the news agency as saying.

Rusnok said this week that at its last meeting on June 22, the bank board is likely to raise the base rate by 0.75 percentage point (pp) or even more. The CNB was, along with Hungary's central bank, the first in the EU to start raising interest rates last year. At the beginning of May it increased rates again to its highest level since 1999, by 0.75pp to 5.75%.

During his appointment back in May, Michl said that once in office he would propose leaving interest rates unchanged which, according to Rusnok, is an unfortunate statement for the central bank representative.

"The key point is that such a board composition does not imply a clear camp of opinion close to the new CNB governor and, as we mentioned, it may be difficult to find consensus. Our view does not change much for now. We expect the CNB to deliver the last rate hike in June and the new board to be more willing to cut rates sooner, which is already implied by the CNB's forecast," Taborsky said.

"Regardless of the new board's view, we believe that the market will still eventually force the central bank to intervene significantly more in the second half of the year," Taborsky added.