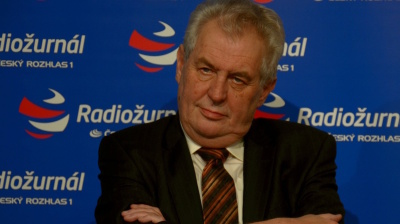 "The Chinese side decided to comply with this request immediately," said President Milos Zeman's spokesman.
By bne IntelliNews March 5, 2021

Czech President Milos Zeman has sent an official request to China for its anti-COVID-19 vaccine Sinopharm, despite the refusal of the Czech Health Minister Jan Blatny to register any vaccine in Czechia that has not been approved by the European Medicine Agency (EMA).

Czechia would be the second EU country to use the Sinopharm vaccine after Hungary.  Poland has also been offered the vaccine. The Visegrad Group countries are all suffering a severe 'third wave' of the pandemic and their governments have criticised the EU Commision's procurement programme for failing to provide enough vaccines. Chinese and Russian vaccines are seen as a potential solution, though neither country has yet had their vaccines approved by the EMA.

The 'vaccine diplomacy' of China and Russia in Central and Eastern Europe has sparked warnings from EU officials, who fear that the vaccines are being used as part of a propoganda campaign to loosen the region's ties to Western Europe.

If China does supply Sinopharm to Czechia there could be a problem using the vaccines. According to Blatny, there is no reason to secure vaccines that will not be granted registration as the insurance companies within the Czech healthcare system will not be able to cover their use. “The doctors will not be reimbursed by insurance companies and vaccines will not receive a certificate to be recognized within the European Union,” he said during a parliamentary meeting.

“As for the often-discussed Russian Sputnik V vaccine, the producer could ask the EMA for approval this week, which I myself would consider to be the best solution, and in the course of this approval, I will be the first to support this vaccine as well as I do for the others,” Blatny said the other day, referring to a statement of the Prime Minister Andrej Babis last weekend that the country is considering using Russian jab. EMA received an official request from the producer of the Russian Sputnik V vaccine to initiate a rolling review of the vaccine on March 4.

As of March 3, Czechia recorded more than a quarter of a million people already vaccinated with the necessary second dose of vaccine against the coronavirus. The number of COVID-19 deaths in the country has exceeded 21,000.

A week ago, Czechia tightened the lockdown measures, due to the highly contagious coronavirus variants spreading throughout the country and overloading hospitals. The measures, in effect since March 1, include the obligation to wear respirators or surgery masks both outdoors and indoors, limiting movement of citizens to only their residential districts, except for essential trips to work or to the hospital.

According to Babis, the measures are unlikely to be eased before Easter.  "I really don't want to promise anything, because we have made promises [about easing the measures] many times in the past ... the virus is unpredictable," Babis said in the Chamber of Deputies.