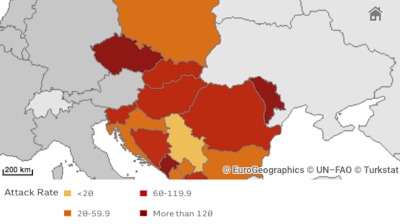 Both Czechia and Slovakia have announced plans for a state of emergency to enter force in early October as they struggle with a new wave of coronavirus (COVID-19) infections.

In response, most states in the region are now tightening restrictions in the hope of keeping the new crop of outbreaks under control.

Czechia’s state of emergency will last from Monday October 5 until the end of October. The government also approved emergency measures for the next two weeks, such as the closure of secondary schools in high-risk regions or restrictions for indoor (up to 10 participants) and outdoor (up to 20 participants) events. Professional sports activities will be held without spectators.

“The current epidemiological situation is not developing very well. The Czech Republic is basically one of the countries where the development has recently the sharpest increase, and like the United Kingdom, France, Israel, we must introduce measures that are able to stop this dramatic increase,” said the new Minister of Health Roman Prymula, at a press conference.

“The number of deaths has been rising and it is logical that we cannot let this curve [of hospitalised patients] unfold in this way,” the minister stressed, adding that the emergency measures will not affect the businesses in any way.

The newly sworn in health minister announced his first anti-epidemic measures a week ago, limiting the opening hours of catering establishments from 10pm to 6am, and approved an obligation for secondary school students and teachers nationwide to wear masks during lectures. Also as of September 21 Prague universities launched distance lectures until October 31.

A review will be held after 45 days. “We'll then decide whether the state of emergency will continue or if we'll return to normal,” Prime Minister Igor Matovic wrote on Facebook.

No national lockdown in Poland

Poland insists there will be no national lockdown after trying the measure in April, which drove an unprecedented economic decline of -7.9% (adjusted) in the second quarter. Instead, the government has adopted a targeted approach in which restrictions are imposed in the counties that have seen the number of new infections grow faster than the national rate.

In the counties marked as “yellow” zones, there will now be a limit of 75 people for public gatherings, including family events such as weddings. There will also be a limit of 100 people elsewhere in the country. The 50-person limit for meetings in the “red” zones remains.

The government has also ordered masks to be mandatory outdoors in the “yellow” zones, on top of the obligation to wear face protections in the “red” zones. The latter are also going to see a new restriction in which restaurants, pubs, and bars will have to close at 10 pm.

The health ministry also said it is making 1,200 beds available in hospitals to boost their capacity of taking care of the growing number of coronavirus cases.

The number of new coronavirus infections in Romania hit a record 2,158 in the 24 hours to September 30, as reported by the government.

“I am very concerned by what I have seen today,” said Prime Minister Ludovic Orban, Reuters reported. The government will now consider additional measures.

The spike in new cases came two weeks after most schools reopened, as did indoor restaurants, following lobbying from restauranteurs and employees.

In per capita terms, the number of new cases per 100,000 of the population in the last two weeks was highest in Montenegro at 528, followed by Czechia (252) and Moldova (190). New cases have also accelerated in Slovenia, and remain high in Bosnia & Herzegovina and North Macedonia.

However, the second wave of infections appears to have subsided in Serbia, which reported just 866 new cases in the last fortnight.

Neighbouring country to Afghanistan thought to be hosting resistance leaders who may be seeking to regroup.