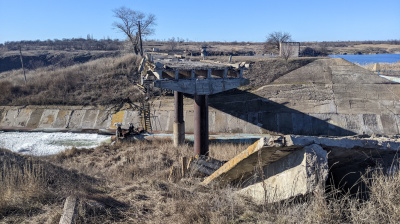 Infrastructure damage from the war will be substantial but Ukraine will also need to make big improvements in its legal and institutional framework, as well as its stock of human capital.
By Robert Anderson in Prague April 26, 2022

The hit to Russia’s economy from the West’s sanctions will be long lasting, and the most damaging impact will come from the blocking of flows of capital and knowledge, Beata Javorcik, chief economist of the European Bank for Reconstruction and Development (EBRD), said during a webcast for the Brussels-based economic think-tank Bruegel on April 26.

Javorcik said the EBRD’s prediction that Russian GDP will decline 10% this year might be seen as disappointing by Western policymakers. However, she pointed out that “the true cost of sanctions on the Russian economy will be felt in the long term” through its isolation from developed economies and the emigration of talent.

“The cost [of sanctions] will be high but the cost in terms of what will not happen will be more significant,” she said.

The EBRD’s economist said foreign investors would not be returning soon, particularly given the current speculation that the Kremlin is planning to nationalise foreign-owned assets. “Investors – even in the absence of sanctions – will think long and hard before they invest in Russia again,” she said.

In the short term, she argued sanctions could only be made more effective by extending them to Russia’s energy exports. “Sanctions will not be effective unless the West diversifies energy sources both geographically and in terms of what sources it uses.”

However, she warned that the West needed to encourage other countries to follow its lead, or its demand for other energy sources would simply crowd out other countries and push them to tap Russian supplies instead.

For Ukraine, the EBRD has forecast a 20% fall in GDP this year, a 23.5pp downward revision compared to the bank’s last set of projections in November 2021.

The IMF this month predicted that Russian GDP would fall by 8.5% this year, while Ukraine's would collapse by 35%. Earlier this month the World Bank forecast respective declines of 11.2% and 45%. Capital Economics has predicted Russian GDP will shrink by 12% and that Ukraine’s economy could halve.

According to the EBRD, at present the war is happening on territories that produce around 60% of Ukrainian GDP. It has cited a National Bank of Ukraine (NBU) estimate that 30% of businesses have stopped production, with a 60% drop in electricity consumption demonstrating the fall-off in activity.

This was creating a $4bn a month shortfall in the Ukrainian budget, Javorcik said. Ukraine would need help to meet this in the short term, as well as a massive rebuilding programme once the war is over.

The Ukrainian government's estimate of $100bn in damage to infrastructure from the war is probably an underestimate, she said, but this is still equal to two thirds of the pre-war annual GDP.

Ukraine will also need to make big improvements in its legal and institutional framework, as well as its stock of human capital, through a thoroughgoing reform programme – something the country has failed to pursue consistently during its 30 years of independence.

A clear EU accession framework will be vital to help Ukraine persevere with the kind of reform programme that the eastern member states of the EU completed in the 1990s. Such reforms are inevitably very painful, create great uncertainty, as well as winners and losers.

“You need an external anchoring device,” Javorcik said. “If Ukraine can use the distant prospect of EU accession this would give direction for reform and lock in the process.”

In terms of the wider EBRD region, the EBRD’s chief economist said the downturn caused by the war and sanctions had hit economies that had not fully recovered from the coronavirus (COVID-19) pandemic and had been already slowing down.

The main channels for the economic damage were through inflation, global uncertainty, the rising cost of capital and the disruption of globalisation, she said.

Inflation was her biggest concern in CEE because curbing it was more difficult than in Western Europe, as the memory of hyperinflation in the 1990s was still fresh. “This memory says with you. In emerging markets people are quick to change inflationary expectations. This means fighting inflation will be very hard.”

The global downturn will have an impact on public finances and the balance of payments, which would worsen existing macro-economic vulnerabilities. Emerging market investors would focus on these metrics, while the greater global uncertainty would make them more sensitive to political risks, all factors that are pushing up bond yields.

“In March there was a big increase in yields on five-year government bonds,” Javorcik pointed out. “Investors will be requiring higher compensation for political risk.”

Many countries have responded to rising energy prices by making temporary reductions in fuel taxes or value-added taxes, only deepening budget problems.

“This will be very costly for government coffers in a situation where government finances are already strained by COVID,” she said.

Governments feel politically bound to reduce these taxes but it would be better to allow prices to take effect as a useful signal to reduce energy demand and thus climate change, as well as cutting demand for Russian fossil fuels.

“Instead of having blanket reductions, you should be making transfers to protect poor households,” Javorcik argued. “But governments shy away from allowing households to bear the burden of higher prices.”

In Middle East and North Africa (MENA) countries, governments traditionally subsidise wheat prices, but this is becoming more and more untenable as food prices soar because of the disruption to exports from Ukraine and Russia. Prices are now close to their 2008 peak, which sparked riots across the region.

Javorcik said governments now face a dilemma over whether to keep the subsidies and risk a blow-out in their budgets, foreign debt and balance of payments at a time of rising global interest rates, or cut them back and risk public unrest.

Tug of war emerging over what role Iran (and its oil) should play in new world order
bneGREEN: Iran records one of the hottest days on Earth ever
Nuclear deal dealt possible death blow as Iran yanks UN cameras