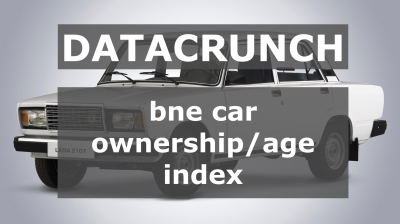 Comparing the number of cars on the road on average and dividing that by the average age gives an insight into how developed a market has become
By bne IntelliNews May 16, 2021

For most people in New Europe the end of the socialist experiment meant one thing: a new car. But drilling into the details of car ownership – how many a country has vs their average ages – paints a somewhat confusing picture. bne IntelliNews has introduced a new index, the bne Car Ownership/Age index (bneCOR) that cuts through the contradictions and paints a much cleared picture of just how far the middle class has come in each country.

In the early 90s the streets of Moscow were largely empty and the types of car on the road were limited to three models: the ubiquitous Lada, known locally as a “Zhiguli”; the grander Volga saloon; and the budget-sized Moskvitch, a Russian version of Berlin’s Trabi.

Fast forward to today, and the roads are chock-a-block with dozens of cars from Japan, Korea, China, America, Germany and the rest. Many of the world’s biggest carmakers have set up shop in Central Europe, Romania and Russia, and even Uzbekistan has a sizeable domestic automotive sector that was established after the collapse of the Soviet Union.

bne IntelliNews has just released a deep dive into the whole car ownership story: “The first thing the emerging middle classes New Europe do is buy a better car.”

However, the picture remains somewhat confusing. For example, Luxembourg has the most cars per capita (694), which is also the youngest fleet on the road in Europe, but new EU member Estonia has more cars per capita (600) than Germany (575), despite having half the per capita income, $26,470 vs $51,860 respectively. How can that be? The answer is the average age of cars in Estonia is 16.7 years, whereas that for Germany is 9.6. Estonians have more cars than Germans on average, but they are mostly old bangers.

Our feature explored the details of each of the main markets, focusing on Eastern Europe and Eurasia. Comparisons are made even more difficult because many of the cars on the road are second-hand, with a huge proportion being second-hand German diesel engine cars; as diesel engines are being banned in Western Europe their value has plummeted and thousands are being bought and driven back to capitals such as Tirana and Kyiv for resale. For example, in the first two months of this year 9,000 new cars were imported but 83,000 second-hand cars crossed the borders.

There are very few statistics on the share of second-hand cars in the fleet in most countries. Ukraine has 215 cars per thousand against Russia’s 303, but almost all of Ukraine’s cars are second-hand, whereas around a quarter of Russia’s are new. In many countries the ownership per thousand can be deceptively high.

To cut through this confusion bne IntelliNews is introducing a new bne Car Ownership/Age index. Similar to our highly acclaimed Despair Index (unemployment + inflation + poverty levels), the bneCOA index is simple: the average ownership of cars on the road is divided by their average age.

This index should level out some of the conflicting discrepancies: Estonia has more cars than Germany, but they are all twice as old, so it gets a score of 35.9, against Germany’s much better score of 60.

The index still doesn't reflect the share of imports of German diesel cars, which is a major distortion, but as the age of those cars is captured in the official statistics the bneCOA still gives a much better picture of how well developed the middle class is as reflected in the number and age of car they own on average.

The first chart shows the number of cars per thousand and as expected, the rich countries of Western Europe all feature high on the list

We have grouped the countries into tiers of over 500 cars, which roughly corresponds to the rich Western Europe; 400-500, which is largely made up of smaller western Europe countries; 200-400 comprised of the 2003 accession countries; and under 200 containing Eastern Europe, the Balkans and Central Asia.

The second chart is the bneCOR index ranking. It is immediately apparent the scale slides much more smoothly from the rich world to the most backward in Central Asia.

In the bneCOR ranking both Poland and Estonia have fallen well below the EU average, although broadly speaking the regional groups from the first chart hold true.

Again we have dived the ranking into four tiers. An easy way to understand what the index score means is to look at the equivalent ratio if you assume an average age of the car is 10 years for all the markets (the EU average is 11.2, including the accession countries).

In Estonia's case, its index score of 35 is the equivalent of a country with a bit more than one in four ten-year-old cars per person, as opposed to the 600 cars per thousand of 16.7-year-old cars it actually has. In this way it becomes much easier to draw direct comparisons of the car ownership in different countries.

Plotting out the bneCOR index result and what is immediately apparent is a much more evenly spread top tier amongst the rich countries and a larger second tier with almost all the accession countries.

The third tier is interesting as countries like Russia do better than expected, while Latvia has done worse. However, Russia is keeping company with the likes of Serbia and Belarus rather than the EU members at the lower end of the scale, but is on the cusp of moving up into that group with a score of 24.2. Ukraine on the other hand with a score of 11 is on the cusp of falling into the very bottom group that is almost entirely made up of the basket cases.

So all in all, the bneCOR index is probably a pretty good proxy for the progress countries have made in the reform process and at what point the quality of life stands for their emerging middle classes.

Findings from the Netherlands-based Group for Analyzing and Measuring Attitudes in Iran (GAMAAN) ahead of the Islamic Republic’s June 18 presidential election.

As part of the company’s PLN140bn investment drive by 2030, Orlen plans getting into offshore and onshore wind, solar energy, as well as energy storage.

Pilot journey inches forward plans to integrate economies of Central and South Asia. Whether the Taliban will stand in the way of the cargo route is still unclear.

Host cites to raise their profiles just as international travel starts to revive, but little hope of the usual tourism and consumer spending bonanza.