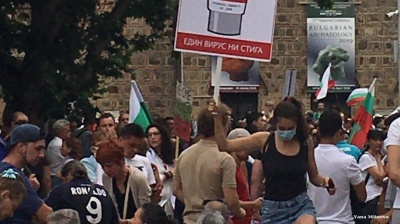 The daily protests in Bulgaria reached their highest numbers yet on July 29, as protesters kept up the pressure on Boyko Borissov’s government and chief prosecutor Ivan Geshev to resign.

On the 21st day of protests, thousands of Bulgarians started blocking main roads in the capital Sofia from midday, while their informal organisers called on people from other towns to join.

Estimates of the number of people in Sofia alone ranged from 25,000 to as many as 40,000, according to Dnevnik news outlet, with smaller protests in other cities.

Some of the protesters decided to set up a tent camp, blocking significant parts of the centre of Sofia, in the hope this would force Borissov and Geshev to finally resign.

The protests have taken place daily since early July. They were sparked by an attempt by Hristo Ivanov, one of the leaders of non-parliamentary Democratic Bulgaria, to get to the state-owned beach near the summer villa of politician Ahmed Dogan, the chairman of honour of the Movement of Rights and Freedoms (DPS).

Ivanov published a video showing that he was pushed into the water by guards from the state security services. Dogan was not entitled to be guarded by them as he does not hold any public post. Moreover, the state-owned beach should be accessible for everyone.

The incident confirmed suspicions among many Bulgarians that Borissov is politically dependent on Dogan and the DPS, even though the party is formally in opposition. Dogan and his party became symbols of corruption in Bulgaria after Dogan openly admitted being behind all major political appointments in the country.

After the video was released, President Rumen Radev was the first to confirm Dogan was guarded by the state security services and insisted on an investigation into why this was allowed.

A day later, Geshev organised an action movie-style raid of Radev’s offices, and the special prosecution arrested two of his advisors on unproven suspicions of influence peddling. The raid rocked Bulgaria as it was seen as an assault on the presidential institution and proof of Geshev’s dependence on the DPS.

Moreover, Borissov’s latest government has been involved in several major corruption scandals that have led to the replacements of more than half of his ministers.

This time, however, the protests have not abated despite a cabinet reshuffle, with demonstrators still saying that Borissov and Geshev must go.

Adding to the pressure on Borissov, a new audio file featuring the prime minister’s voice was sent to local media anonymously on July 29.

In the audio, the man is talking to someone he addresses as Tomislav – believed to be Deputy Prime Minister Tomislav Donchev – using vulgar and offensive words against Radev and against people protesting against a planned hike in the retail price of fuel back in 2018.

Although the recording does not contain information on possible corruption or abuse of power like previous leaked tapes, it confirms many Bulgarians’ view of Borissov as uncultured.

The prime minister is also increasingly becoming a target of satirists.

“I watched and listened to the meaningful people from the protest. Borissov, this complete sociopath, has already gone but has not realised that yet,” Hristo Komarnitski, a famous Bulgarian cartoonist, wrote on Facebook.

A cartoonist from the Netherlands posted a picture of a pumpkin wearing a hat on Twitter summing up the reason for the protests in Bulgaria: Borissov has been dubbed the Pumpkin (a metaphor for stupidity) and Geshev is nicknamed the Cap due to his preference for wearing caps on any public occasion. Both the pumpkin and the cap in the cartoon are labelled corrupt.

Bulgaria remains the most corrupt EU member and has been criticised for years for not making any progress in the fight against top level corruption.