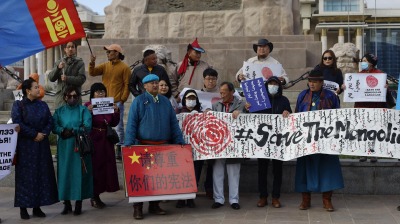 Protesters gathered in front of the Mongolian Government Palace.
By Anand Tumurtogoo in Ulaanbaatar September 16, 2020

Demonstrators on September 15 rallied in Mongolia’s capital Ulaanbaatar to protest against a visit by the Chinese government’s top diplomat, Wang Yi, amid accusations that Beijing is suppressing the native language and culture in ethnic Mongolian regions of China.

The protesters were responding to a recently introduced policy that forces elementary and secondary schools in China’s Inner Mongolia region to adhere to a national curriculum in Chinese language, politics, and history. China said the policy was designed to promote national unity and insisted that there would still be room for Mongolian language teaching in other subjects and grades, Reuters reported.

The policy has led to school boycotts and claims that Beijing is trying to destroy Mongolian culture. Reports of 4,000-5,000 ethnic Mongolians being detained and at least nine people losing their lives have circulated, and the US-based Southern Mongolian Human Rights Information Center has accused Chinese authorities of turning the region into a “police state”.

Many of the protesters said they were heartbroken to see no one from the current government and State Great Khural speak about the issue during Wang’s visit.

While the protesters were gathered outside the Government Palace, Wang met with Mongolian Foreign Minister Nyamtseren Enkhtaivan, vowing to advance bilateral cooperation in fighting the coronavirus (COVID-19) pandemic and further promote the two countries' ties. The two sides said they reached a consensus on extensive cooperation, and agreed to speed up the alignment of the joint construction of Belt and Road Initiative projects and Mongolia's Prairie Road development initiative, and actively promote sewage treatment plants, hydropower stations, the transformation of shanty towns and other major projects agreed and under negotiation.

They also committed to expanding China’s imports of agricultural and animal husbandry products and coal from Mongolia, and to further strengthening the cooperation between ports and cross-border economic zones, Xinhua reported.

Beijing was expected to provide Mongolia with a 700mn yuan ($103.15mn) grant during Wang’s two-day visit.

Many Mongolians said they were outraged that Beijing was muzzling Mongolia into submission. Mongolia’s economy is heavily dependent on China as more than half of its foreign trade is with the giant neighbour. Local analysts at eagle.mn pointed out Wang’s visit to Mongolia was not a coincidence and that the purpose was to remind Mongolia of where it stands.

Since the pandemic broke out, Mongolia has seen its foreign trade shrink. The Asian Development Bank (ADB) now projects Mongolia's economic output will drop 2.6% in 2020. That compares to the 2.1% contraction it was forecasting in April and the 1.9% decline foreseen in June. A rebound to 5.1% in 2021 is also anticipated by the ADB. "Mongolia was able to contain the pandemic but could not avoid the associated economic cost," said Pavit Ramachandran, ADB country director for Mongolia.