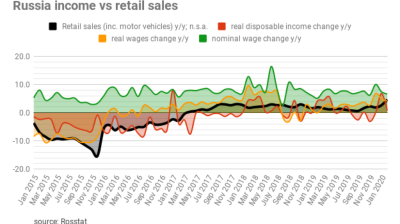 After six years of declines Russia's real incomes began to grow again at the end of 2019. That's all over now and the declines are back.
By bne IntelliNews April 27, 2020

Real disposable income of Russians was down by 0.2% in 1Q20, according to the latest data by Rosstat statistics agency.

As reported by bne IntelliNews, real disposable income has been in decline since 2013, finally recovering to only 1% growth in 2019, but incomes are expected to dive again in 2020 by up to 5%.

Small businesses and consumers are expected to be hit hardest, with recent reports warned that consumer demand could take up to three years to recover from the coronavirus (COVID-19) stop-shock.

Analysts surveyed by Vedomosti daily on April 26 attribute the first decline in disposable income on January-March 2020 to ruble devaluation and instability on the oil market. The worst hit to incomes (of up to 14% decline) is expected in April-June after companies cut salaries and sacked workers as the lockdown measures were introduced.

Surveys have showed that almost a third of Russian companies forced their employees to take unpaid leave on the first week of the lockdown. Should they lose their jobs, 42% of Russians would only have enough savings to last for one month without resorting to consumer and other loans.

In the second anti-crisis support package the President Vladimir Putin proposed a number of additional measures aimed at relieving SMEs that are expected to have the most troubles in keeping their staff on board.

As of May 18 the companies that have kept at least 90% of their staff will be able to receive support of one minimal wage per each employee. The president has also extended the RUB150bn programme of discounted "salary loans" that are aimed at financing the cash flow breaks and maintaining salary payments. State development bank VEB.RF (former Vnesheconombank) will run the programme that could require an additional RUB130bn.

The analysts mostly saw the additional measures announced by Putin as too little and too late, noting that only a small fraction of SMEs will be able to maintain 90% of their staff throughout the crisis to be able to benefit from modest support. Few businesses will be able to afford loans to streamline their cash flows after the lockdown measures expire.