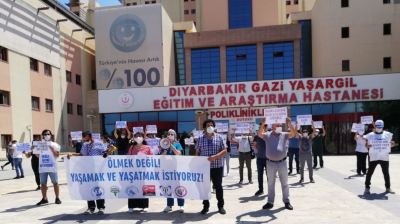 Health workers in Diyarbakir protesting against what they see as the Turkish government's impassivity in the face of a health disaster.
By Akin Nazli in Belgrade August 31, 2020

Intensive care units in many Turkish hospitals are full and doctors at some hospitals in the southeastern city of Diyarbakir are plainly having to choose which coronavirus (COVID-19) patients in a critical condition are admitted into their intensive care units (ICUs) to be given a chance of survival, Sinan Adiyaman, head of the Turkish Medical Association (TTB), said on August 30.Even in the capital Ankara, intubated patients, who should be in ICU beds, are kept on stretchers, according to Adiyaman.

His statements are a reminder of the harrowing television pictures that came out of Italy in April, and Adiyaman made the point that even Turkey’s official number of COVID-19 cases has now moved ahead of the total in Italy.

“They [officials] say there are around 250,000 patients [who have been officially recorded as having a coronavirus infection in Turkey] to date but we know that this is not the case. The real number is about 10 times higher than what is stated,” he also said.

“The [health] minister says that there are 1,400 patients daily. The daily averages of Ankara and Izmir alone reach 1,400. When we add other provinces, we understand that the number of cases [nationally] is much higher than what is stated,” he added.

Some 41% of ICUs in Turkey are at private hospitals and Health Minister Fahrettin Koca has said that Turkey’s ICU occupancy rate stood at 65%, Adiyaman recalled.

The minister’s figure suggests that the ICUs at the state hospitals are full. Meanwhile, state sector patients cannot turn to private hospitals because the Social Security Institution (SGK) has stopped covering fees, according to Adiyaman.

“Outpatient clinics and intensive care [units] are full. The workload of physicians and health workers increases every day. There is an obvious burnout. Many of our friends in Batman, Diyarbakir, Denizli, Alanya, Manisa, Eskisehir, Ankara [basically Turkey as a whole from the west to the east] have started to resign. Many of our friends request retirement or other appointments,” he added.

The “burnout” issue has prompted health workers to launch a hashtag on Twitter, namely #ölüyoruz (WeAreDying).

There is absolutely no joke here, emphasised Adiyaman, who, as head of the country’s medical chamber, reiterated his call for the TTB to be given a meeting with the health minister.

The TTB on August 28 wrote an open letter to Koca to request a meeting.

Since the official start of Turkey’s coronavirus outbreak in March, the TTB has not been able to meet with Koca.

Also on August 28, the heads of the medical chambers of Istanbul, Ankara, Izmir, Bursa, Adana and Diyarbakir told daily Cumhuriyet similar things to what Adiyaman had detailed.

“Outbreak out of control”

“The outbreak is out of control and the responsibility has been entirely placed on the shoulders of the people and health workers. Our seriously ill COVID-19 patients who need [treatment] follow-ups at hospitals are forced to have treatment at home as there are no beds available in hospitals,” Diyarbakir Medical Chamber said  in a statement.

On August 29, Istanbul and Ankara’s mayors claimed during a webinar that the official COVID-19 data for the nation as a whole is fake, and that they can determine that because they have the data for their cities alone that demonstrate the infection and death rates must be much higher countrywide.

On August 26, Mehmet Ceyhan, head of the department of paediatric infectious diseases at Hacettepe medical faculty in Ankara, told Cumhuriyet that the outbreak in Turkey “has gone out of control”.

The government is yet to show any sign that it recognises the seriousness of the situation as described by the medical profession.