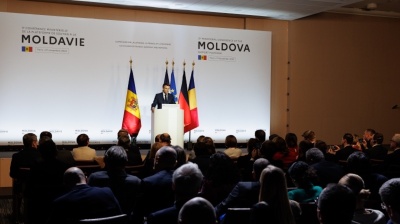 €100mn was pledged to help Moldova during the third donor conference organised for the country by France on November 21, French President Emmanuel Macron announced.

The conference was organised to help Moldova, one of the poorest countries in Europe and severely affected by the war in neighbouring Ukraine and the energy crisis. However, the country’s Prime Minister Natalia Gavrilita said it is too early to say whether this is new money and if so, how it is going to be spent.

"Firstly, I wish to say we are very grateful to those who have organised this support platform,” Gavrilita said on a TV show on pro TV.

Speaking at a press conference with Moldova’s President Maia Sandu, Macron said that “we have decided to mobilise exceptional aid of over €100mn”.

"Currently, in Moldova, the economic situation is used by sympathisers of Russia, by enemies of Europe to organise ... paid demonstrations, to destabilise the presidency and the government, to fight against Europe. So, abandoning Moldova at such a time, would mean that Europe it is no longer faithful to its values ​​and ideas," Macron added.

The bulk of the €100mn announced by Macron will come in the form of a €90mn loan extended for the period 2023-2024 by the French Development Agency.

€10mn will be transferred by the end of the year, in the form of a subsidy to be granted by the United Nations High Commissioner for Refugees, the World Food Programme and UNICEF, "to support refugees to be able to pay their bills from this winter, food and education”. Moldova hosts 80,000 Ukrainian refugees.

€2mn “will be mobilised” through the European Bank for Reconstruction and Development (EBRD) to support public reforms, especially in the energy sector, Radio France International reported.

In addition, “powerful generators” will be supplied in the first months of 2023 to equip Moldovan hospitals.

Germany added €32.3mn commitments to Moldova, with most of the money aimed at increasing the efficiency of Moldovan buildings, before the November 21 donor conference. Sweden also announced a €16mn aid for Moldova.

According to the records of Moldova’s government, €622mn has been extended to the country’s government by the donors this year, out of which €480mn is soft loans aimed at financing the budget deficit.

Moldova estimates that it needs some €1.1bn this winter to pay for the extra expenditures incurred after Gazprom cut gas supplies to 50% of normal (contractual) levels in November, forcing it to seek gas from other sources at a higher price and to import expensive electricity essentially from Romania’s spot market — except for a couple of bilateral agreements subsidised by the Romanian state.