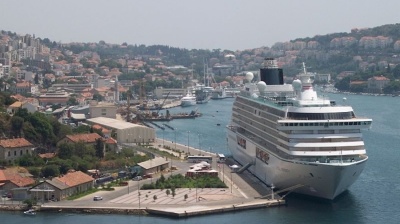 The Croatian city of Dubrovnik is planning to introduce a tax on foreign cruise ships from 2021, state news agency Hina reported on September 28.

There is a growing backlash in Croatia’s popular cruise destinations — especially the historic city of Dubrovnik — over the frequent visits by huge cruise ships.

Dubrovnik mayor Mato Frankovic said back in December 2018 that the city was limiting the number of cruise ships allowed to dock to two per day with no more than 5,000 passengers between them.

Cruise ship arrivals was up 7% this year to a total of 57 foreign vessels docked at Croatian seaports on 368 cruises in January-July this year, data from the Croatian Bureau of Statistics (DZS) showed.

While its inclusion on Mediterranean cruise routes helped to establish Croatia as a tourist destination after the breakup of Yugoslavia, the issue of pollution is causing a backlash against the cruise ship business.

In recent years Dubrovnik’s walled centre has been in danger of being overwhelmed by tourists, and received a further boost to its profile — and consequent hike in tourist numbers — as one of the locations in the HBO hit series Game of Thrones.

There are also concerns about the pollution from huge cruise ships as highlighted by environmental consultancy Transport & Environment (T&E) issued a damning report that revealed toxic sulphur oxides (SOx) emissions from cruise ships on European routes are many times higher than the entire SOx emissions from the continent’s car fleet.

Among continental European nations, Croatia is the worst affected relative to the country’s car emissions; cruise ship emissions were 189.6 times as high as those from cars, the report found. Three Croatian cities are among the top 50 cruise polluted cities in Europe: Rijeka (where cruise ships cause 12.3 times as much SOx pollution as passenger cars), Dubrovnik (19.2 times) and Split (4.8 times).