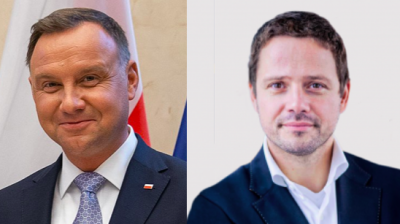 Poland’s incumbent President Andrzej Duda and his rival Rafal Trzaskowski dived headfirst into the final two weeks of the presidential election campaign on June 29 after the near-complete results of the first round set up a run-off vote between the two.

With nearly 100% precincts reporting, Duda, backed heavily by the government and the servile state media, won the first round with 43.67% of the vote that took place on Sunday. Trzaskowski was the runner-up with 30.34%.

The two rivals immediately began courting the electorates of other candidates. Winning as many voters as possible from cohorts that supported contenders ranging from the far-right to the left will be key to success. To do so, both Duda and Trzaskowski will need to add to, and alter, their campaign platforms – but also be wary not to alienate or demobilise their core electorates.

Duda’s winning the run-off – due on July 12 – is key for the Law and Justice (PiS) led government to continue virtually unchallenged with its agenda. Trzaskowski’s pulling off a victory would greatly limit PiS’ powers since the ruling party does not have a majority to overturn a veto from an opposition president.

The relatively large support for the independent Szymon Holownia and the far-right’s Krzysztof Bosak – 13.85% and 6.75%, respectively – make their voters the primary target for both Duda and Trzaskowski. Over 2.5mn Poles voted for Holownia. Bosak scooped 1.3mn votes.

Already on the election night, when the exit polls results poured in, Duda appealed to Bosak’s supporters, accentuating proximity on issues like family and the adherence to Catholic values.

For his part, Trzaskowski underlined that Bosak’s liberal economic views are close to his.

Holownia said he would announce his decision on who he would endorse by “around Wednesday” although he hinted on the election night Duda was an unlikely choice.

“I will consider [Holownia’s] ideas mine,” Trzaskowski declared, also on the election night.

With so little separating the incumbent from the challenger, Duda and Trzaskowski will also need to make concessions to the smaller groups of voters, who supported the leader of the Polish People’s Party (PSL), Wladyslaw Kosiniak-Kamysz (2.37%), and the Left’s Robert Biedron (2.21%).

Another key aspect of the campaign will be keeping core voters mobilised. Duda is expected, then, to continue presenting himself as the guarantor of the PiS government’s welfare policies, which Trzaskowski allegedly wants to dismantle.

Trzaskowski has said a number of times that welfare spending will remain. To keep his core voters alert, the mayor of Warsaw is expected to attack Duda for being instrumental in PiS’ subjugation of the courts and the public media that has put Poland at loggerheads with the EU.

Erdogan administration has in fact held on to emergency regime powers ever since the failed July 2016 coup attempt. Yet a lot of reporting on the country fails to take that into account.

Russia raises key rate to 6.5% amid strong inflationary pressure
10 hours ago
Erdogan’s relations with West in danger of renewed deterioration in ‘Varosha’ row
11 hours ago
Ukraine makes surprise policy rate hike to 8% to fight inflation
17 hours ago
US court rules Kyrgyzstan in contempt for pushing ahead with local legal action against Kumtor Gold
20 hours ago
Turkey extends 'undeclared state of emergency'
1 day ago