EBRD 2022: President says it is supporting wartime commerce in Ukraine and planning for the future 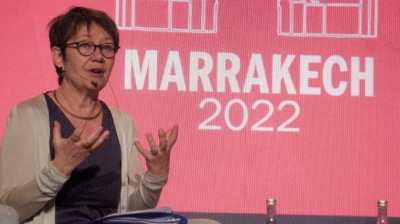 President of the EBRD Odile Renaud-Basso says the situation in Ukraine remains fluid but business is starting to restart. / wiki
By Ben Aris in Marrakech May 12, 2022

The European Bank for Reconstruction and Development (EBRD) has switched its focus and is pouring help into Ukraine as it struggles to cope during the war with Russia, but thought is already turning to the eventual reconstruction of the country when peace finally returns, the president of the development bank Odile Renaud-Basso said at a press conference on the last day of its annual meeting on May 12.

“We are meeting of course as the world was trying to recover from the COVID pandemic and the world is now confronted with the war in Ukraine, which alongside major loss of life, major destruction, is bringing additional and fresh economic strain, threatening energy and food security,” Renaud-Basso said. “There will be some impact from this war beyond the immediate region to all our countries of operation… The EBRD will use all of its resources to support all these countries.”

The war in Ukraine has been at the heart of all the discussions amongst the delegates that gathered in Marrakech in Morocco from the 73 member countries, as the wide economic effects spill out to affect counties throughout Emerging Europe, Eurasia and down into Africa.

Renaud-Basso said that the EBRD was very fast to react to the news of Russia’s invasion of Ukraine on February 24 and protested “within hours” of the first tanks crossing the border. Both Russia and Belarus were swiftly cut off from using any of the EBRD resources.

“Since the assault on Ukraine in the early hours of February 24 the bank has moved swiftly. As the biggest international investor in the country, within hours of the attack we condemned Russia for starting the war and stated our unwavering support for Ukraine,” said Renaud-Basso.

The EBRD very quickly made available a €2bn package of support for Ukraine and other countries in the region to deal with the refugee crisis amongst other measures.

However, with the Russian forces' withdrawal from around Kyiv and its increasing focus on the Donbas, the rest of the country is beginning to return to normal with the support of the EBRD.

“From what we have seen we have been very impressed with the resilience of the economy in Ukraine and the institutions. I met with the central bank and the finance minister and they were explaining that the banking sector is functioning. Most of the bank branches are open and the banks can provide financing and people are depositing their money. There were no bank runs. So the system is really functioning,” Renaud-Basso said. “And we see the same in public companies. We have signed a contract with [power company] Ukrenergo and the company is functioning and delivering electricity. And the sowing campaign is going on with the support of the government.”

Nevertheless, all Ukraine’s companies are under pressure and Renaud-Basso reported that many of the bank’s clients have asked for payments to be postponed or rescheduled, which the bank has been doing.

“There was a big shock at the beginning of the war with a bit of a standstill, but things are now coming back. One of the major challenges, and especially for the agri-businesses, is the question of logistics. The ports were blocked and it was a very important way to export grains and this remains a huge challenge, but we have seen a lot of SMEs and companies from different sectors developing different ways to alternative ways [to export] through Poland and other countries.”

The governors have decided to support Ukraine in both the short and long-term and we are “already beginning to think about reconstruction whenever it becomes possible”, Renaud-Basso said. During the controversial governor’s meeting on May 11 the donors committed to supplying an additional amount “towards €1bn” of funds to support Ukraine.

“We will deploy this money alongside our own resources to support infrastructure and companies in Ukraine and other affected countries. It is an outstanding expression of confidence in the bank and definitely helps us invest into projects worth a much greater amount,” Renaud-Basso said.

The war is not over, but after Russia refocused its military effort into “Phase 2” and concentrated on capturing the Donbas region and the southeastern corner of the country, the rest of the country has largely returned to Kyiv’s control. The economy in the government-controlled regions is slowly starting to restart with shops and cafes in Kyiv reopening.

The National Bank of Ukraine (NBU) reported on May 10 that card terminal usage across the country shows that the Ukrainian economy is gradually returning to work, with the number of non-cash payment terminals owned by PrivatBank increasing by 42% in the last two weeks, with small businesses resuming card payments more actively. At the start of the war the number of active terminals fell by 66% at its lowest point, and the volume of transactions fell by 39% during the first two months.

The EBRD believes that between 30% and 50% of all Ukraine’s companies have suspended operations but as the military operations are now more concentrated in the eastern regions, small businesses in particular are starting to revive their operations and the EBRD has launched a programme worth €150mn specifically to support this activity.

However, the country still needs help to keep the power on and municipalities need cash to cope with the millions of people that have been internally displaced, not to mention help to allow farms to start on the sowing season.

Renaud-Basso said that the EBRD is also helping with these sectors, providing trade-financing facilities and it signed off on a €50mn loan to Ukrenergo, the national power company, to provide emergency liquidity to the company so that it could continue to provide electricity to the grid. In addition there was another €53mn package to provide farmers with funds to allow them to work.

Overshadowed by the Ukraine war, the bank’s governors also took another historical decision during this year’s meeting and approved a “limited and phased” expansion of the EBRD’s operations to sub-Saharan Africa and Iraq.

“This doesn't mean we will be starting activities there yet. Further steps will be needed. For now our focus will be on the Ukraine crisis and we will come back, subject to further decisions taken by our board of governors, with the next steps on sub-Saharan Africa and Iraq no later than this time next year,” Renaud-Basso said.

Belarus expands its use of the death penalty
7 hours ago
The Mariupol siege is over as the last Azov defenders surrender
18 hours ago
Kyrgyzstan: Eccentric health minister fights for his job amid claims of corruption and bullying
1 day ago
Azov commanders have remained behind in the Mariupol steelworks to continue the fight
1 day ago
Russia hopes Chinese carmakers will help revive Moskvitch brand
1 day ago