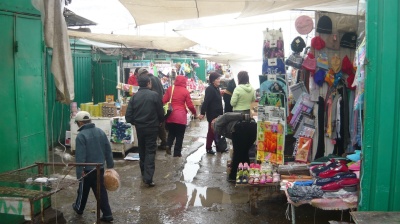 Shoppers at a bazaar in Naryn, Kyrgyzstan, where the war in Ukraine will push 2.8% of children and 1.8% of adults into poverty. / Clare Nuttall
By Clare Nuttall in Glasgow October 19, 2022

A new study by the United Nations Children's Fund (Unicef) finds child poverty has risen by 19% in countries across Southeast and Eastern Europe and Eurasia as a result of the war in Ukraine.

Overall, an additional 10.4mn individuals, or around 2.5% of the total population of 22 countries assessed across the region, will fall into poverty due to the economic shock related to the war in Ukraine, including 4mn children. Thus while children make up 25% of the region’s total population, they will account for 40% of the increase in poverty.

The single worst affected country is Russia, according to the research. Russia’s invasion of Ukraine has rebounded on its own population, with the most significant increase in the number of children living in poverty; an additional 2.8mn children now live in households below the poverty line. That is almost three-quarters of the total increase across the region.

At least an additional half million children in Ukraine will also be plunged into poverty. The actual figure is most likely more, as the projection is based on the International Monetary Fund's (IMF's) spring forecast of a 10% contraction in GDP; with the war dragging on for months already a much sharper economic decline is now expected.

Unicef cites estimates based on IMF growth forecasts from October 2021 (before the invasion of Ukraine) and April 2022 (two months after the invasion) which show that, in the absence of the war, the GDP per capita (USD PPP) for the 22 countries surveyed would have risen to $24,700 in 2022 from $23,300 in 2021. What actually happened was a considerably smaller increase to only $23,600. This means “the war and subsequent economic downturn has cost the region about $1,100 PPP per person for the 424mn population – or approximately $462bn PPP in total,” the report said.

While the impact is harshest in Russia and Ukraine, Unicef finds that several Southeast European countries plus Kyrgyzstan in Central Asia will also see a sharp increase in poverty. 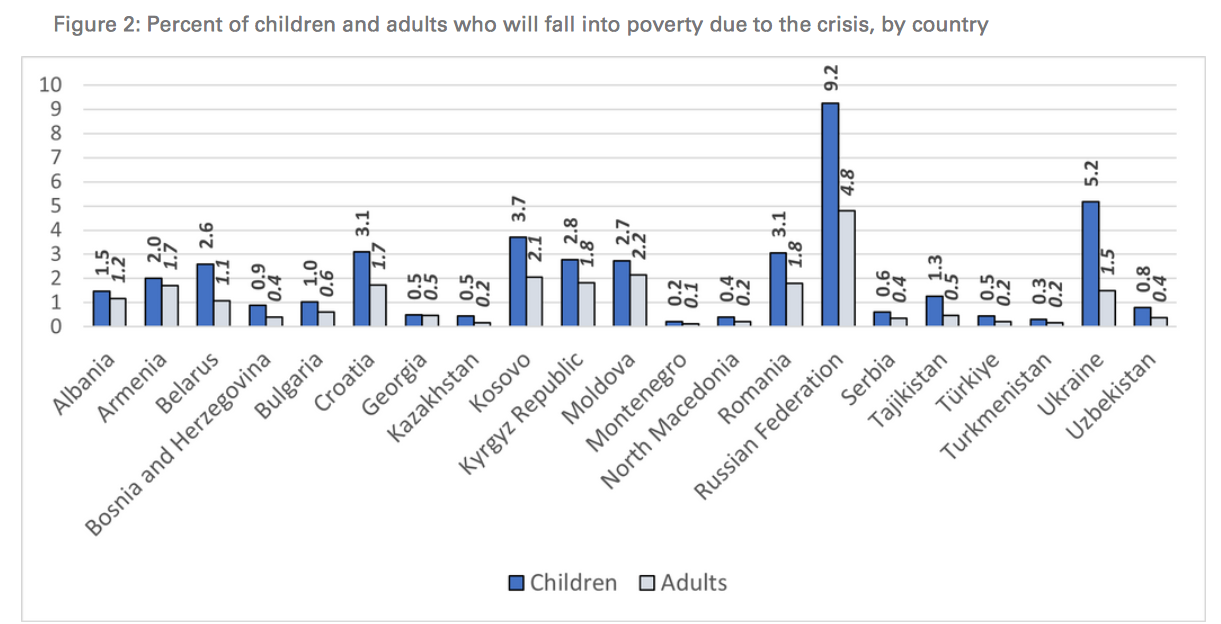 The exception is Azerbaijan, where the report says poverty is expected to decrease this year. Gas-rich Azerbaijan is expected to benefit from increased demand from European countries seeking to end their dependence on gas imports from Russia.

The problems are not just financial, since child poverty has severe implications for health and education. Unicef forecasts that the increase in poverty could result in an additional 4,500 children dying before their first birthday, and learning losses could be equivalent to an additional 117,000 children dropping out of school this year.

Unicef’s report stresses that the burden of the current crisis is failing heavily on poorer households. “The poorer a family is, the greater the proportion of their income that is committed to necessities such as food and fuel,” it says.

“The region-wide effect of the economic downturn is truly a crisis for the poor, and a crisis for millions of children. This is because across the region and within countries, the effects of the crisis – and specifically falls in remittances, and increases in food and fuel prices – are not experienced equally. Families with a higher reliance on remittances, and who spend a greater proportion of their incomes on necessities such as fuel and food – primarily the poor and those with more dependents – will be hit the hardest everywhere.”

The war and related economic downturn affect families in three main ways, namely higher prices for basic goods (food and fuel); disrupted trade and supply chains, and falling remittances; and increasing uncertainty in business and investment causing a worsening of economic conditions in the long term and stifling the recovery.

Making the problem worse, the current economic downturn, following swiftly after the financial shock of the coronavirus (COVID-19) pandemic, is forcing some governments to reduce public spending or put in place austerity measures.

While the Eastern Europe and Central Asia region as a whole grew over the last two decades, there have been a number of crises during that period. They include the global financial crisis of 2008, the annexation of Crimea in 2014 and the subsequent devaluation of the Russian ruble in 2015 and the COVID-19 pandemic. All “led to widespread disruption of markets and supply chains, falls in remittances, and falls in economic growth in the ECA region – and with subsequently serious implications for child poverty risks,” said the report. “This is now true for the war in Ukraine.”

Unicef’s report forecasts the current crisis will be even worse than those that preceded it.

“The current crisis is now piling on more misery for families and children, and worryingly is projected to be the starkest of all recent crises for the region,” it says.

“A key concern is that many countries in the ECA region are heavily reliant on Russian markets, and forecasts predict that the economic contraction related in 2022 will be the largest shock in the Russian Federation since the transformation crisis (1992) that followed the collapse of the Soviet Union.”

Among the differences from the recent COVID-19 crisis and the current crisis caused by the war in Ukraine, are the refugee flows from the war and more limited fiscal and social protection responses at the national level.

Lukashenko's and Shoigu's latest meeting in Minsk has spurred new fears that Russia may be putting increased pressure on Belarus to join the war by putting boots on the ground.

Russia has been eagerly pushing for the further development of Turkey as a “gas hub” for its gas supplies to Europe. Analysts are asking if this simply a ruse to dodge sanctions and surreptitiously continue to export gas to EU members.

Twenty years ago the young freelance photojournalist Roddy Scott was killed by Russian forces in the Pankisi gorge in Georgia, a refuge for terrorists and a transit point into neighbouring Chechnya during the war there.

Majority strived to keep the youth-led demonstrations peaceful, but the bitterness now held towards top officials runs deep and was clear for all to see.

Is Russia putting additional pressure on Belarus to join the war?
5 hours ago
Can Russia sneak gas into the EU via a Turkish gas hub?
1 day ago
Roddy Scott Foundation providing education to the children of war-torn Pankisi Gorge
1 day ago
Mongolians attempt to storm Government Palace as protests over coal profits scandal swell
1 day ago
Belarus Corruption Watch: living the high life with Dimitry and Anna Lukashenko
2 days ago