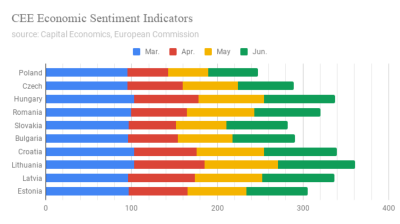 The economic sentiment indicators started to pick up again in June across Central and Eastern Europe (CEE), but there are big differences between the countries as they start to recover from the coronacrisis at their own speeds, Capital Economics reported in a note on June 29.

“The broad-based rise in June’s Economic Sentiment Indicators provide further signs that the economies of Central and Eastern Europe started to get back on their feet at the end of Q2. That said, the rebound in sentiment has differed across sectors and the surveys point to a 5% year-on-year fall in regional GDP in Q2,” Liam Peach, Emerging Europe economist with Capital Economics said in a note emailed to clients.

The countries where economic sentiment is recovering fastest are Poland and Slovakia, which are also the two economies that experienced the steepest falls in sentiment at the start of the second quarter. On the other hand, sentiment in Czechia barely changed in June.

Capital Economics calculated a GDP-weighted economic sentiment indicator. As the chart shows, economic sentiment took a beating in May during the onslaught of the coronavirus (COVID-19) epidemic, but has started to recover from that deep fall: Capital Economics’ weighted indicator rose from 60.0 in May to 68.0 in June in CEE, but it remains well below its pre-virus level of 97.2 in March, the consultants said in a note.

“On past form, the ESI suggests that regional GDP declined by around 4% y/y at the end of Q2, after contracting by more than 6% y/y in April,” Capital Economics said. “The breakdown showed that the improvement in sentiment was broad-based across sectors.”

The service sector has bounced back in all countries of the region, but the rebound remains weak, as the epidemic is not over and now there are growing fears of a second wave, as bne IntelliNews has reported. Sectors such as hospitality are expected to take the biggest hits, which will cause serious problems for tourist-reliant countries like Turkey and Croatia.

The industrial sector is doing better as factories across the region start to reopen, albeit with social distancing regimes imposed on workers. The manufacturing-heavy economies of Central Europe have rebounded strongly and have now clawed back around half of their fall between March and April in the Capital Economics’ weighted sentiment index.

“Sentiment rebounded most strongly in Slovakia, but the one outlier was the Czech Republic, where manufacturing sentiment hit a fresh record low, “ said Peach.

“All told, the ESIs suggest that industrial sentiment has rebounded more quickly than services sentiment since lockdown measures were loosened. One implication is that the headline ESI is likely to overstate the strength of sentiment as it gives a lower weight to the services sector than the national accounts. We expect the slump in GDP in Q2 to be closer to 10% y/y, but the low-profile data that we track for June provides encouragement that economic activity will continue to recover strongly in the second half of the year,” Peach concluded.