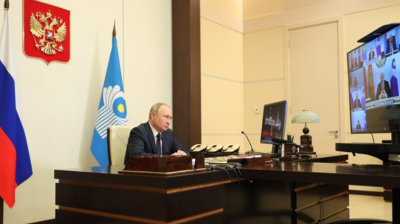 Uzbekistan on October 15 stuck to its standpoint that the country has no plans to allow units of the US Armed Forces to deploy on its territory as part of efforts to counter terrorist threats emerging in neighbouring Afghanistan.

The Uzbek defence ministry’s reiteration of Tashkent’s position on the matter came after reports from the US that Biden administration officials were still pushing the possibility of housing "over the horizon" counterterrorism forces in Uzbekistan and after Russian President Vladimir Putin, in a video address to a Commonwealth of Independent States (CIS) summit of ex-Soviet states, said: "According to our intelligence, the number of [Islamic State] members alone in northern Afghanistan is about 2,000 people."

The Russian leader also claimed that Islamic State fighters have plans to move between ex-Soviet Central Asian countries disguised as refugees, in order to stir up religious and ethnic discord. He did not give details.

Bahrom Zulfikarov, spokesperson of the Uzbek defence ministry, stated: "According to my information, Uzbekistan has not received an offer to deploy United States anti-terrorist forces on its territory and does not plan [to enable] such steps, since this is prohibited by the Constitution and is not provided for by the defence doctrine of our country."

However, an October 13 report published by the National Security Daily column of Politico repeated earlier claims that representatives of the Pentagon were planning to discuss the possibility of locating US counterterrorism forces in Uzbekistan and that the Washington administration had been conducting similar negotiations with Uzbekistan and other states bordering Afghanistan—which include Tajikistan and Turkmenistan—for several months.

“Uzbekistan moved up on the priority list after the withdrawal from Afghanistan. The two countries neighbour each other and Tashkent was open to discussions about bringing in refugees and hosting American troops, though it so far has disappointed on both fronts. Still, some lawmakers see Uzbekistan as a country uniquely positioned to help the US secure regional interests down the line,” Politico cited US officials as saying.

The Wall Street Journal, meanwhile, in late September reported (paywall) that the Pentagon's top command has discussed with Russian officers a Putin proposal for joint use of Russian military bases in Central Asia to combat terrorist threats in Afghanistan. Russia has military bases in Tajikistan and Kyrgyzstan.

Earlier this week, Putin warned of the threat of hardened fighters from Iraq and Syria with Islamic State links moving into Afghanistan, while the Russian foreign ministry urged the Taliban rulers, who took control of the country in mid-August after the chaotic withdrawal of the last US-led forces, to deal with the threat.

As Russian and American intelligence agencies continue to try and gauge and track the level of the terrorist threat evolving in Afghanistan, the situation clearly remains highly fluid.

On October 13, a group led by US House foreign affairs chair Gregory Meeks (Democrat-New York) returned home from a trip to Uzbekistan. According to a news release, “the delegation met with Uzbek government leaders to convey their appreciation for the support Uzbekistan provided to the U.S.-led evacuation efforts from Afghanistan and discuss regional security challenges”.

“I’m concerned about the notion that the US can keep eyes and ears inside Afghanistan now that we’re outside,” House Representative August Pfluger (Republican-Texas), a House foreign affairs committee member who went on the trip, told Politico. “Having a friend in the region in geographic proximity to that potential terrorist safe haven is important tactically and strategically.”

Pentagon officials will this month participate in a delegation to Uzbekistan to discuss security cooperation efforts, the media outlet added, noting that top of the agenda would be the possibility of sending in counterterrorism forces that would allow the US military to more easily surveil and strike targets in Afghanistan.

Moscow, meanwhile, is preparing to host international talks next week on the situation in the country. The US, China and Pakistan are to participate in the initial discussions, scheduled for October 19, while the Taliban and other regional actors are to join the meeting a day later.

Putin's special envoy to Afghanistan, Zamir Kabulov, said on October 15 that the talks would focus on trying "to work out a common position on the changing situation in Afghanistan". The Taliban, he said, were yet to announce the composition of their delegation and Moscow did not expect any “breakthrough solutions”, though it would "openly state our complaints to the Afghan delegation".

Putin on October 15 said there was no need to rush with official recognition of the Taliban but also observed that "we understand that we need to interact with them".

Of the Central Asian nations that border Afghanistan, Uzbekistan and Turkmenistan are strongly in favour of stepping up interaction with the Taliban, while Tajikistan, which hosts a self-proclaimed anti-Taliban Afghan government-in-exile and members of the National Resistance Front of Afghanistan (NRF), also known as the Second Resistance, continues to demand that the Taliban regime allow for the appointment of a multi-ethnic government. Tajiks, who speak a variety of Persian, are the second largest ethnic group in Afghanistan, perhaps making up more than a quarter of the population and the majority of inhabitants in some northern areas of the country close to the border with Tajikistan.

Academic sheds light on Rahmon regime’s attempts to crush the Pamiris
COMMENT: Does Russia have any friends left in Southeast Asia?
bneGREEN: Zero-carbon housing a key battleground for climate change

Ukraine will receive $5.5bn in support from the US later this month
2 hours ago
John Malkovich to turn Skopje into Hollywood of the Balkans
2 hours ago
Envoy says start made on construction of Turkish attack drone factory in Ukraine
12 hours ago
Huge explosion rocks Russian airbase on the Crimean peninsula
15 hours ago
Russia cuts oil flow via Ukraine's Druzhba pipeline, blaming sanctions for blocking transit payments
15 hours ago