Election results in France and Slovenia go against Orban 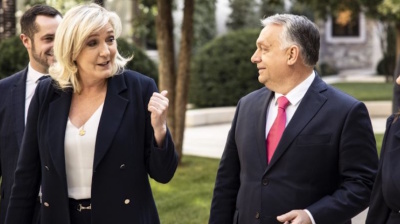 The election defeats of Janez Jansa in Slovenia and Marine Le Pen in France are bad news for Hungarian Prime Minister Viktor Orban, who was hoping for a breakthrough of rightwing leaders after his election victory earlier this month.

Hungary’s self-proclaimed illiberal strongman has become increasingly isolated in the European arena and the election defeat of Slovenia’s populist SDS means he has one less ally in the European Council at a crucial time when the EU is set to trigger the rule-of-law mechanism against Hungary.

According to the first commentaries, the weekend elections results mean that the room of manoeuvre will narrow for Orban and his nationalist Fidesz party in Brussels and Strasbourg.

Hungary's growing isolation in the EU, as well as Orban's close alliance with Vladimir Putin, could come to a head in the next few weeks as the EU considers imposing oil sanctions on Russia. This could force Orban to choose between vetoing an EU decision, leading to his further isolation, or angering his patron in Moscow, potentially damaging the lucrative gas and nuclear deals he has signed with the Russian dictator.

The Hungarian prime minister has already come under sharp criticism for his pro-Russian stance in the conflict not only from the Czech and Slovak prime ministers but also from Jaroslaw Kaczynski, the leader of Poland's Law and Justice party, undermining the unity of the Central European V4 grouping.

Orban expressed his unequivocal support for Jansa when the two leaders met in February. Jansa has been active in Slovenian politics for 30 years, just like his Hungarian counterpart, and he has gradually moved towards the hard right, copying some of the methods of Orban.

The Slovenian PM took strides to solidify his media background with the financial help of Hungarian investors close to Fidesz. Businessmen close to Orban’s informal advisor Arpad Habony gained ownership in Slovenian media over the past few years.

The potential sale of the country’s biggest tourism group Sava to a Budapest-based company headed by a business partner of Orban’s son-in-law has also sparked political debates, after which Jansa was forced to halt the deal.

The Orban government’s expansion in Slovenia went so far that Hungary became the largest foreign investor in Slovenia in the past few years, which sparked protests.

The French election results could also make it harder for Fidesz to form a joint alliance with radical European parties, analysts noted.

Hungary’s illiberal leader has been actively seeking to gather allies on the European political landscape to form a new, large parliamentary group in the European Parliament after he had become persona non-grata in the EP’s largest political block, which eventually led to a bitter divorce in early 2020.

Marine Le Pen’s National Rally and Orban’s Fidesz party were among the 16 European radical rightwing parties from the populist Conservatives and Reformists (ECR) and  Identity and Democracy (ID) fractions in the EP which signed a common declaration in the summer.

The Hungarian PM and Fidesz party leader met Le Pen several times in the last 12 months and endorsed her bid for the French presidential race.

During their meeting in Budapest in the fall, Orban thanked Le Pen for standing up to Hungary in the EP.

Le Pen’s loss in the election could also make the cooperation of eurosceptical parties, which are split on a number of issues such as cooperation with Russia, more difficult.