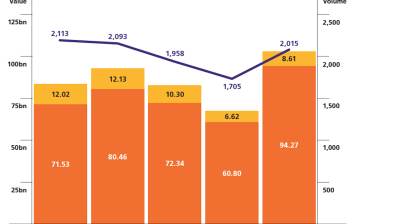 Before last year, dealmaking value had fallen for three years in a row, according to the Emerging Europe M&A Report by law firm CMS and information platform EMIS.
By bne IntelliNews January 26, 2022

Mergers and acquisitions in Central and Eastern Europe recovered to pre-pandemic levels in 2021, rising by 18.2% in terms of volume and by 55.1% in terms of value, according to the Emerging Europe M&A Report 2021 by law firm CMS and information platform EMIS published on January 27.

CMS called 2021 “a year of rebound and recovery for dealmakers in emerging Europe”, after 2020 was blighted by the pandemic. In 2020 deal value had fallen for the third year in a row and there had been the lowest number of deals in the 10 years CMS had been publishing the report.

Last year, by contrast, with 2,015 transactions, deal numbers exceeded those of 2019 (1,958), while overall deal value reach its highest level since 2013 at €94.27bn as low interest rates and big cash piles pushed up valuations. The region (which for the report includes Turkey) has now experienced five consecutive quarters with deal values well over €20bn.

“M&A activity in emerging Europe experienced a resurgence in 2021, with buyers and sellers appearing to recover their confidence at the prospect of the pandemic being brought under control,” said Horea Popescu, head of CMS’s CEE Corporate M&A practice.

Looking ahead, Radivoje Petrikić of the CEE Corporate Practice said: “Although uncertainty about the impact of new variants and the prospect of economic fallout from higher inflation has led to a more cautious end to the year, our findings show that dealmaker confidence has largely been restored. In 2021, the main drivers of deals were long-term underlying trends, such as digitalisation, and with the pace of change and shift to digital continuing to accelerate, the fundamentals for an active dealmaking market remain firmly in place.”

It was a record year for IPOs, as the number of listings surged to 116 (up from 26) and values jumped to €13.47bn (up from €4.79bn). Six out of the 10 largest IPOs happened on international exchanges, where they raised nearly €7bn, including the €3.22bn listing of Poland’s parcel locker company InPost in Amsterdam and the €1.48bn listing of Russian retailer Fix Price Group on the LSE. At the regional exchanges the largest listings were those of Pepco Group (€825mn) and Huuuge Games (€367mn) in Warsaw, as well as United Medical Group (€423mn) in Russia.

Telecoms and IT accounted for five of the 10 biggest deals of the year and registered the highest overall deal value at €23.4bn. Transaction numbers rose to 450 (up from 333). Significant Telecoms deals included the sales of Polkomtel Infrastruktura and UPC Polska in Poland, and the sales of České Radiokomunikace and a 30% stake in CETIN in the Czech Republic.

Notable software deals included the €7.3bn sale of Avast Software in the Czech Republic and the €1.6bn purchase of game developer Nexters Global by Kismet, both arising in Russia.

Manufacturing was the third-busiest sector with 253 transactions (up from 236) and second by value at €18.26bn.

Mining, Oil and Gas was the third-largest sector by value at €10.59bn, though it was one of the few sectors where deal numbers declined (down to 105 from 124).

Growing investor interest in climate action helped drive up the overall number of energy and utility deals to 122 (from 73). The renewables sub-sector saw particularly impressive growth in both deal activity and value, numbering 81 deals (up from 44) and a fourfold increase in value.

In terms of countries, Russia saw M&A activity bounce back, with transactions up by 15.8% to 609 and deal values up by 51.2% to €45.38bn. Values were the highest since 2013, lifted by megadeals such as the €6bn merger of petrochemical groups Taif and Sibur.

In Poland deal volumes were down 4.3% at 270, but deal values, up 2.3% at €11.93bn, were at the highest level in the past decade. The biggest deal was the €2.5bn acquisition of insurer Aviva Poland by Allianz of Germany. Real estate was the busiest sector by volume, accounting for a quarter of deals, while Telecoms and IT was the largest by value, including the €1.56bn purchase of Polkomtel Infrastruktura by Cellnex of Spain and the €1.52bn purchase of UPC Polska by Iliad of France.

In Czechia, despite deal volumes easing back 7.6% to 110, the value of deals reached an all-time high of €13.37bn thanks to the €7.3bn purchase of Avast Software by Norton Lifelock of the US.

In Turkey volumes increased by 27.2% to 234 deals, in line with pre-coronavirus (COVID-19) levels, while values dipped by 12.3% to €6.89bn, still above 2019 levels. The largest deal was the €1.28bn fundraising by e-commerce platform Trendyol.com from an international consortium including Softbank.

The United States was the most active foreign country investor. US deal numbers rose to a decade high of 154 (up from 94) and values more than doubled to reach a record high of €9.17bn.

The UAE moved up the foreign investor ranking to secure tenth position for its deal numbers, the highest outside the US and Europe.

Russia was the largest single investor country overall, with 564 deals worth €37.3bn – almost all (96%) of these being domestic transactions.

Emerging Europe private equity activity rose further with deal numbers at an all-time high (399) – representing one fifth of overall deal volume – and values up 18% to €23.75bn.

Among the venture capital deals, there were a record 308 deals, up a record 74%, with value more than doubling to €7.7bn. Russia was the leading destination by volume with 74 deals, while Turkey was the top VC investment destination in terms of total value invested at €2.5bn, followed by the Czech Republic at €1.5bn.

The Telecoms & IT sector was unsurprisingly the most active by VC deal count with 186 deals, or 60% of all activity. It also led in terms of value, with deals worth €2.7bn, ahead of Wholesale & Retail, which had deals worth €2.66bn.

Since mid-April, Russia has focused on capturing the Donbas. In the last week it seems as if Ukraine’s leadership is preparing the nation for a major defeat.

Russia seeks ‘new Mariupol’ in the Donbas
11 hours ago
EU’s credibility on the line over enlargement
1 day ago
Explainer | Why Tajikistan’s Pamiris don’t trust their government
1 day ago
Meet the latest Russian tycoon to be promoted to the Premier League
2 days ago
Ruble falls to below RUB60/$1, putting pressure on the Russian budget in 2022
2 days ago