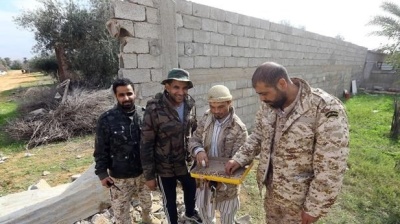 There's still no end in sight to the Libya conflict. If anything, it threatens to deteriorate.
By bne IntelliNews January 29, 2020

Turkish President Recep Tayyip Erdogan has in the past two days hit out at Abu Dhabi for bankrolling Russian mercenaries fighting for warlord Khalifa Haftar in Libya and Russia for violating agreements that are meant to stem the conflict in northern Syria where Turkey has backed rebel militia and has set up 12 observation posts around Idlib.

Turkey’s leader on January 28 issued a rare direct rebuke to the rulers of Abu Dhabi, saying that the emirate was covering the wages of thousands of Russian fighters who support Libyan general Haftar. The UAE and Egypt are, meanwhile, thought to be backing Haftar with air power. Turkey has provided military support to the internationally recognised government in Tripoli led by Prime Minister Fayez al-Sarraj. The truce lately agreed at a summit in Berlin appears to be unravelling.

“Haftar is, at the moment, like a desert lord in Libya,” Erdogan told reporters during a flight from Algeria to Gambia, according to a transcript of his remarks published by his office. “He has control in desert areas but not in populated regions.”

Reuters reported that in fact Haftar holds sway over the country’s east and many Libyan cities as well as most of its key oil installations. This month, his forces also took the city of Sirte.

Turkey was monitoring Haftar’s “ugly attempts” to grab more land and would do whatever is necessary to stop him, Erdogan said.

Oil-rich Abu Dhabi has turned into a regional rival to Turkey in recent years with Erdogan supporting Islamist political movements such as the Muslim Brotherhood seen as a threat by Mohammed bin Zayed, crown prince of Abu Dhabi and de-facto leader of the UAE as well as by Cairo. Haftar is seen by the UAE and Egypt as a bulwark in Libya against the spread of Islamic extremists. Turkish-backed Syrian rebels have according to many media accounts been flown in by Turkey to help defend the position of Sarraj. Ankara has also supplied armed drones.

By supporting Sarraj, Turkey will hope to secure major trade and investment contracts under his administration and use the alliance as a help in staking its claim to various gas and oil deposits in the Mediterranean. Ankara’s moves for such resources have already angered Greece and Cyprus, among other countries in the region.

Western officials have said more than 1,400 fighters with the Russian Wagner group, headed by a confidant of President Vladimir Putin, have arrived since September to back Haftar’s Libyan National Army (LNA), which has its eyes set on capturing Tripoli.

No mercenaries denial from Putin

Putin has not explicitly denied the presence of the mercenaries in Libya. However, he said on January 11: “If there are any Russian citizens there, they neither represent the interests of the Russian state, nor receive funding from the Russian state.”

Turning his attention to Syria, Erdogan was on January 29 reported by NTV as saying that Ankara was losing patience with the military assault in the country’s northern Idlib region, adding that Russia was violating agreements aimed at defusing the conflict there.

Renewed bombardments by Russia-backed Syrian government forces on Idlib appear to be creating a potential new refugee wave that could head for Turkey.

Turkey and Russia, which back opposing sides in Syria, agreed to work towards de-escalating the Idlib fighting and creating a demilitarised zone under agreements in 2017 and 2018 known as the Astana and Sochi accords. But fighting continues to flare up in the final rebel bastion in Syria following a civil war that has so far lasted nearly nine years.

“Currently, Russia is not abiding by Astana or Sochi,” NTV quoted Erdogan as saying.

Speaking to reporters on his flight back from Senegal, he said that Turkey, which is building houses in northern Idlib to shelter civilians fleeing the bombing, has told Russia that it is running out of patience, Reuters reported.

“If we are loyal partners with Russia on this, they have to put forth their stance... Our wish is that Russia immediately makes the necessary warnings to the regime which it sees as a friend,” he said.

On January 28, Syrian government forces entered a town south of Idlib city, in a marked advance for President Bashar al-Assad. Turkey warned it would retaliate against any attack on its observation posts around Idlib.

Saudi murderers of Jamal Khashoggi ‘received paramilitary training in US’