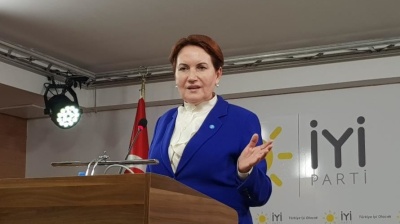 Aksener asked how Erdogan could achieve in eight months what he has failed to achieve in nearly 20 years. / Yıldız Yazıcıoğlu (VOA), wiki, public domain.
By bne IntelIiNews April 20, 2022

Remember Turkey’s “Vision 2023” goals set more than a decade ago? Opposition politician Meral Aksener certainly did on April 20 as she tore President Recep Tayyip Erdogan off a strip for setting goals for 2053 and even 2071 when he is just eight months from missing the targets he once grandly declared would be hit by next year.

The government “started to claim that they could do in eight months what they could not do in 20 years”, Aksener said—referencing how long Erdogan has roughly been at the helm—as she addressed parliamentary members of the IYI (“Good”) party that she leads.

Dismissing the 2053 and 2071 targets, she added: “If you want to present a vision for Turkey, first solve today’s problems.

“We heard those words 11 years ago as well. ‘Great Turkey, great power.’ The target was 2023, wasn’t it? What did you promise for 2023? With eight months to 2023, our nation in today’s Turkey waits in line for bread and butter and buys tomatoes and peppers piece by piece.”

Municipalities distribute bread ration cards to citizens because the country imports wheat, added Aksener, also hitting out at a runaway inflation rate—officially at 61%, but 143% according to independent research—that is at its highest in two decades.

Vision 2023 was announced by Erdogan as a list of goals that should be met to coincide with the centenary year of the Republic of Turkey. If achieved, Turkey would, among other things, become one of the world’s top 10 economies with a GDP of two trillion dollars a year (as things stand Turkey might in 2022 rank as the 23rd biggest economy with economic output of around $700bn, according to the IMF), have a per capita income of $25,000 (presently, the country is struggling to reach $10,000) and an unemployment rate of 5% (officially, unemployment is at around 10%, but there are methodologies used by Turkish trade unions that put the figure two or three times higher).

The excruciating economic crisis that has beset the republic in the years leading up to its 100th year is well documented but Mustafa Sonmez, an economist and writer, on April 20 drew attention to new figures showing there may be worse to come.

“Turkey’s galloping inflation, on course to top 100% in the fall, has been causing daunting income transfers from the poor to the rich, worsening further the income distribution gap in the country, economic data show,” wrote Sonmez, in a piece for Al-Monitor.

He added: “Annual consumer inflation, which stood at less than 20% in September 2021, skyrocketed in six months to reach 61.1% in March. The sharp uptick has rendered pay rises in the beginning of 2022 irrelevant, stoking real income losses. Along with wage- and salary-earners, agricultural producers, too, have taken severe blows from inflation, with the gap between agricultural product prices and industrial prices growing to the detriment of farmers.”

Turkey’s chronic income inequalities, which already worsened in 2021, appear on course to climb to staggering levels this year, said Sonmez, referring to economic growth data by the Turkish Statistical Institute (TUIK or TurkStat). The figures show that payments to employees last year dropped to 30.2% of gross value added from 33.1% in 2020, while the share of net operating surplus/mixed income, earned by employers, rose to 52.6% from 49.3% in the same period. “This is a clear indication of income transfer,” said Sonmez.

According to trade unions cited by Sonmez, the monthly cost of a healthy and balanced diet in Turkey rose to nearly Turkish lira (TRY) 6,000 ($410) for a family of four in March. That’s well above the minimum wage of TRY4,253. And, as the economist pointed out, of the 20 million people in Turkey who earn monthly salaries or daily wages, nearly half of them are paid the minimum wage or slightly higher salaries. “In other words, the minimum wage is not just a reference floor but has become the prevalent pay in Turkey,” said Sonmez.

Erdogan will have every chance to explain where Vision 2023 went wrong in the lead-up to the parliamentary and presidential elections which, by law, must take place by June 2023 at the latest.