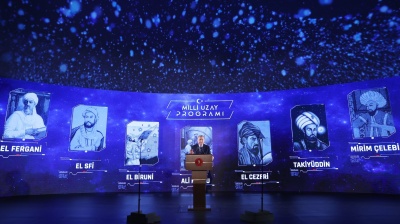 Erdogan did not share any budget details during his speech on the programme broadcast live on television. His announcement came on the same day that a probe built by a regional rival of Turkey, the United Arab Emirates, successfully entered Mars’s orbit.

Erdogan said the first goal of the programme was to make contact with the moon in 2023, the centennial of the founding of the Turkish republic. Sending Turkish astronauts into space, building a Turkish spaceport, and developing sophisticated satellite and meteorology technology were other objectives.

The Turkish space agency (TUA) was founded in December 2018.

Turkey has been beset by economic stress for several years and Erdogan's popularity ratings in the country are seen as low and falling. The astronomical costs of a space programme such as that announced will not be easily borne by the state budget. But TUA supporters say the project will deliver technical and highly specialised jobs, reducing the brain drain abroad of scientists and researchers.

In January, Erdogan had a telephone call with Elon Musk, chief executive of SpaceX, the private US space exploration company. Erdogan and Musk spoke about technological cooperation with Turkish companies, but few other details of the call were released.

In cooperation with SpaceX in January, Ankara launched the next-generation Turksat 5A communications satellite from the US. It will be used for both civilian and military purposes.

Prior to the space programme announcement, a metal monolith-like structure mysteriously appeared and disappeared in the southeast of Turkey. It was later revealed as a  publicity stunt related to the unveiling of the programme.

The 3-metre-high metal slab with the inscription “Look at the sky, you will see the moon,” written in ancient Turkic script, was discovered in a field last week by a farmer in Sanliurfa province.