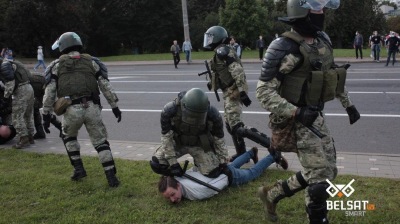 An estimated quarter million Belarusians took to the streets for the March of the Heroes.
By Ben Aris in Berlin September 14, 2020

More than a quarter of a million Belarusians turned out for the Sunday September 13 “March of the Heroes” rally, according to estimates, as the protests against Belarus' self-appointed President Alexander Lukashenko continued to gather momentum fuelled by the mounting brutality of the police.

Lukashenko put more police and OMON riot officers on the streets than ever, but the return of random detentions and the increasing violence of the police have fed popular anger and the March of the Heroes turned out to be what is seen as the biggest rally to date. The crowd size estimates are necessarily rough but the rally was clearly of the order of the previous two rallies, and easily in excess of the risible official estimate of a mere 3,000 participants.

The detentions began almost immediately, with the Ministry of the Interior reporting more than 250 people arrested for participating in an illegal rally.

“All of them had flags and other unregistered symbols as well as posters,” the ministry stated somewhat superfluously.

That popular anger will get another boost after video of a police major brutally hitting a woman in the face and knocking her off her feet went viral, as the crowd rallied around the officer shouting “Shame!” Telegram channels announced that work was under way to identify the officer and said he would be held to account.

The crowd size once again swamped the authorities' attempts to prevent the demonstrations, as huge columns of marchers simply swept past the lines of OMON officers.

Minsk remains the main focus of the Sunday marches, but social media showed parallel demonstrations in 17 other cities and towns across the country, including in Lida, Gomel, Brest and Mogilev, as enraged citizens become radicalised and join the protests in increasing numbers.

In the smaller cities the demonstrations didn't have the advantage of overwhelming numbers, but the crowd was still large compared to the limited number of OMON forces available away from the capital. In Vitebsk determined protesters challenged the OMON lines. Some faced arrest while the remainder surged past and continued their demonstration.

And the opposition is atomising as increasingly small groups use Telegram channels to co-ordinate local actions and share news and plans. These groups are becoming organised enough to create local identities. They use the red and white flag that symbolises the opposition, but add local district names and icons.

“New Belarus Civil Society is being formed. People living in the same neighbourhoods create chats on telegram where they discuss local issues, politics, coordinate activities with other people from the same district. They even created alternative emblems for their neighbourhoods,” Franak Viacorka, a local journalist, said on Twitter. 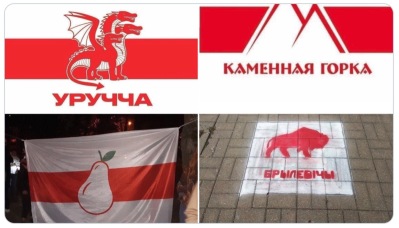 While the authorities were rendered powerless in Minsk, the crowd was still careful to avoid provocations that could give the officers an excuse to use force. Several uniformed men were seen carrying what appeared to be shotguns, and one officer fired a shot into the air.

Before the march began, the state warned protesters not to gather and threatened them with detention and the use of “equipment.” In Brest that meant a water cannon that was turned on the protesters for the first time. As bne IntelliNews  reported, the police have dozens of the domestically produced  “ACS-40 Tsunami specials”, namely trucks mounted with water cannon that were made at the Minsk Automobile Plant (MAZ), better known for making giant mining trucks. They had never been used against the population before this week. 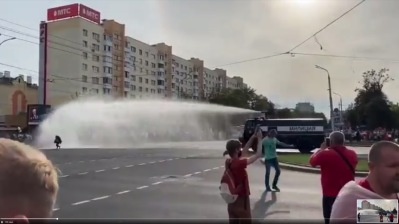 Lukashenko was hoping to crack down on the protests ahead of meeting Russian President Vladimir Putin in Sochi on September 14. They are due to discuss deepening the integration of their two countries with a Union State deal. Now Lukashenko goes into the meeting with a significantly weaker hand.