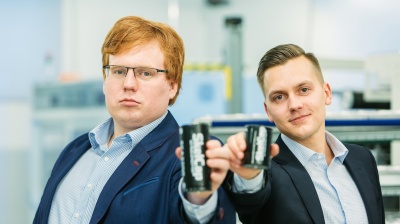 By Linas Jegelevicius in Vilnius November 3, 2020

Estonian startup Skeleton Technologies, one of the largest European manufacturers of ultracapacitor-based energy storage, has raised €41.3mn in a Series D financing round, bringing its total capital raised to over €93mn, the company announced on November 3.

This investment will further accelerate Skeleton's growth, after just two months ago, the company signed a €1bn letter of intent with a leading automotive manufacturer to bring the technology to market.

Skeleton’s ultracapacitors, a type of energy storage, can be charged quickly and can release large burst of energy very quickly. Recently, the startup has been developing a graphene-based superbattery that combines the rapid charging properties of ultracapacitors with some of the long-term energy features of a battery. Taavi Madiberk, founder and chief executive of Skeleton Technologies, says the superbattery could be used in combination with a lithium-ion battery to make electric cars faster to charge up and cheaper to run.

Madiberk says that he sees is a “big change” in the industry from four or five years ago. “Mainstream investors are finally starting to understand this sector. Now a lot of fintech investors are realising that cleantech is one of the biggest investment opportunities since the internet,” he is quoted as saying.

New investors in this round include leading European industrial investors and a group of entrepreneurs "that grew payments company Adyen from its inception to successful IPO", according to reports from Skeleton.

Skeleton’s products are already on the market and, despite COVID-19, the company will reportedly see three-fold revenue growth for the second year in a row.

The company’s story started in 2010, when Madiberk and Oliver Ahlberg bought some intellectual property from a group of Estonian scientists with a view to helping them commercialise ultracapacitor technology. With a background in legal studies and no knowledge of the tech in question, the two men founded Skeleton Technologies.

In the beginning, the founders reportedly relied on search engines, LinkedIn and industry conferences to get in contact with potential customers. As the products' performance became better known, customers began to find them too.

Skeleton Technologies' first customers were R&D departments of automotive companies. Just two years after the company was founded, the European Space Agency jumped aboard too, wanting to use the Estonian company's products in space.

In 2015, the company announced that it closed a €9.8mn round of Series B financing from a consortium led by Harju Elekter Group, which owns electrical equipment manufacturing plants in the Nordic-Baltic markets, and UP Invest, one of largest investment firms in the Baltic region. The money were used for scaling up production of graphene-based ultracapacitors, ongoing R&D, and supporting growing sales.

Like its non-stock market quoted competitors, Skeleton Technologies does not disclose its revenue numbers, but the prediction for 2020 is circa €150mn.