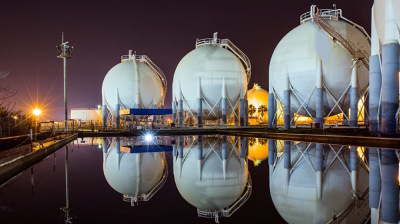 LNG gas storage tanks.
By Linas Jegelevicius in Vilnius May 16, 2022

Estonia’s Infortar, an Estonian-based major investment holding company, and the Estonian energy company Alexela are moving forward with constructing liquefied natural gas (LNG) facilities at the Port of Paldiski without state support. When built, the Paldiski terminal is expected to receive LNG – natural gas cooled to liquid form for ease of transport – from a floating terminal, a vessel fitted out for the purpose.

Estonia consumes around 5 TWh of natural gas per annum, with gas of Russian origin currently accounting for 80% of this. The government is now keen to end this dependence following Russia's invasion of Ukraine.

The Estonian Minister of Economic Affairs and Infrastructure Taavi Aas said on May 13 that the two companies would be “going it alone”, i.e. would not receive state support, ERR.ee, an Estonian news website, reported on May 13.

"They are doing it under market conditions, without any additional state contribution, and not even state guarantees. The only task of the state is to ensure the connection of the quay to the mainland and to ensure that the gas reaches the Estonian gas network,” the minister is quoted as saying by Estonian media.

Earlier in the week, controversy arose over claims that Alexela had requested a €40mn state subsidy, which the company denies now.

As reported, talks involving the economic affairs ministry and state-owned grid distributor Elering ground to a halt last week, but, a week later, “good will can now be found”, Martti Talgre, CEO of Infortar said. Since the deadline for the construction of a proposed LNG terminal in Estonia is just six months away, this requires strong cooperation on the part of all parties, including the state, he emphasised, however.

One aspect which still needs resolving relates to a join agreement for leasing the LNG floating terminal which Estonia signed at the beginning of this month; whether this procurement goes ahead depends on whether any viable alternative arises, Taavi Aas said.

The minister also noted that if through-flow of LNG is at around the 30 TW mark, then terminal fees, another sticking point in the discussions, will be relatively small, while the Etonian Competition Authority (Konkurentsiamet) will monitor this process.

The price of natural gas is expected to rise amid both the ongoing energy crisis and the need to decouple from dependence on Russian gas, but the use of LNG via the terminal will not lead to an additional rise in gas bills, energy expert Marko Allikson has said.

The price of European natural gas for the winter or by the time it can be bought through Paldiski depends primarily on whether Russian flows continue, especially to Germany and the rest of Europe. If they do not continue, prices will rise significantly from today's levels, he says.

Infortar says, however, that the supply is likely to be enough to make up the shortfall once Russian natural gas is out of the equation, but this will be possible with up to three tanker vessels operating.

Estonia and Finland are linked by the Balticconnector pipeline, and, via Latvia and Lithuania, to Poland too, while Lithuania already has an operational LNG terminal at Klaipeda.

"A changeable market situation would make fixed-price agreements insensibly expensive, which is why we recommend our customers get flexible packages where the price changes with the market. The price of gas would need to stabilise before we could return to offering fixed prices, while no such development can be seen today," Kersti Tumm, press representative for Eesti Gaas, said.

On May 10, Estonia and Finland signed an agreement on the security of natural gas supply, according to which the two neighbouring states are to assist each other in case of disruptions in supply.

Meanwhile, the country’s parliament, RiIgikogu, has concluded the first reading of a bill that aims to ensure readiness for long-term disruptions in the supply of gas. The draft legislation was prompted by Russia's attack on Ukraine.

Estonia is set to keep around a fifth of Estonia's annual natural gas needs in the form of a reserve, as part of efforts to decouple from dependency on Russian supply in the wake of the Ukraine war.

Government claims three quarters of foreign companies in Russia are still working
12 hours ago
Moldova says it won't be able to make next payment to Gazprom
12 hours ago
Russia resumes oil supplies to Slovakia and Hungary but imports to Czechia remain halted
12 hours ago
US charges Iran operative with plotting to kill former Trump hawk John Bolton
20 hours ago
Ukraine will receive $5.5bn in support from the US later this month
1 day ago