EU neighbours push for Bosnia to get candidate status 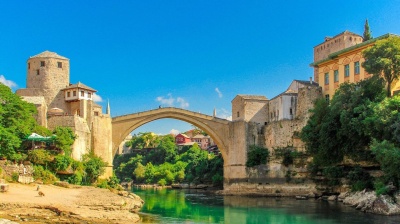 Slovenia’s Foreign Minister Tanja Fajon said her country will present a plan for granting Bosnia & Herzegovina EU candidate status along with Ukraine, a statement on the ministry’s website said on June 20.

Bosnia has failed to get candidate status for years despite signing a Stabilisation and Association Agreement as constant political disagreements have frozen reforms.

Slovenia is the second EU member state in the region urging the bloc to grant Bosnia candidate status. Earlier in June, Croatian President Zoran Milanovic also said this should be done prior to fulfilment of all requirements by Bosnia.

“We must do everything to make the enlargement policy credible, which means that we must not forget enlargement to the Western Balkans,” Fajon said in the statement.

“Given that the enlargement process itself could become questionable, we support all EU efforts to launch negotiations with North Macedonia and Albania, abolish visas for Kosovo and grant Bosnia candidate status,” she added.

Pahor believes that the EU must act as a guarantor of security and stability in the Western Balkans, especially Bosnia, in light of Russia's aggression against Ukraine and the effects of the war on European security.

Slovenia’s president has also noted that Bosnia should meet all EU requirements but candidate status must be granted first as this would strengthen the pro-European forces in the country and the dynamics of internal adjustment to European norms.