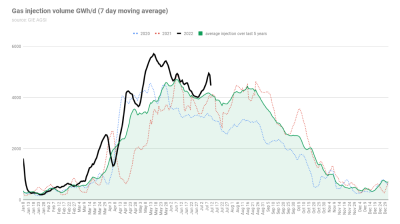 Europe is still on target to have gas storage tanks 80% full by the start of October, but a lot of uncertainty remains.
By bne IntelliNews July 7, 2022

Natural gas storage tanks in Europe were just shy of 60% full on July 4 as non-Russian supplies of gas appear to have surged in the last weeks.

The race is to collect enough gas so that the storage tanks are 80% full by October 1 that will ensure Europe’s power and heating needs for the coming winter. The only time in the last ten years when Europe had less gas on this date was in 2021, when it started the heating season with tanks 77% full, and that was enough to cause a big energy crisis that saw prices on the gas spot market increase 20-fold.

As bne IntelliNews reported in June, even with the reduced flows from Gazprom, Europe was still on course to meet the October 1 deadline – and it still is.

Despite the reduction in Russian gas, deliveries from other sources saw the injection rate accelerate in the second half of June (chart), presumably from increased LNG deliveries that are currently running at record levels.

With tanks 59.8% full on June 4 the amount already in the tanks is in the middle of the results for the same date in 2021 and 2020 (chart), when a warm winter and unusually high levels of storage made for an easy winter. The 2021 levels of storage represent a benchmark and if gas storage levels fall below those of 2021 that would almost certainly spark another crisis.

Germany is particularly vulnerable, as it has no LNG terminals, and so no access to alternative sources of gas. Berlin has rushed through commissions to build four terminals in short order, but those will be available only next year at the earliest.

It appears that most of the increase in the injection rate was due to German orders of alternative gas as Germany’s storage was climbing faster in June than that of the EU average (chart). German tanks are 62.6% full as of June 4, slightly ahead of the EU average, after being 52.53% full a month earlier.

If the current rate of filling continues, then German tanks will reach the 80% benchmark sometime in the last week of September.

Gas supplies are due to be interrupted again on July 11 when the Nord Stream 1 gas pipeline is taken offline for its annual 10 days' maintenance and German politicians fear it will not be turned on again. In that case the 80% target will very likely be missed.

The Kremlin set teeth on edge when the state-owned gas giant Gazprom announced it had reduced flows of gas to Europe by 60% in the middle of June, blaming German company Siemens for failing to return broken compressor equipment because of sanctions.

German Vice-Chancellor Robert Habeck, in charge of economics and energy, wasn’t buying it and characterised the reduction as an “attack” that was politically motivated.

Germany’s economy is heavily dependent on Russian gas, of which only 15% is used in power generation. The rest is used for heating and as feedstock in industry.

Many of Germany’s most important industries could face collapse if Russia cuts off its natural gas supplies, the head of the German Federation of Trade Unions (DGB), Yasmin Fahimi, said in an interview with the newspaper Bild am Sonntag, Bloomberg reports.

“Because of the gas bottlenecks, entire industries are in danger of permanently collapsing: aluminium, glass the chemical industry,” said Fahimi. “Such a collapse would have massive consequences for the entire economy and jobs in Germany.”

Fahimi is calling for a price cap on energy for households. The rising costs for CO2 emissions mean further burdens for households and companies, Fahimi added. The crisis could lead to social and labour unrest, she warned ahead of emergency talks with Chancellor Olaf Scholz that started on June 4.

In addition, Russia has cut off gas supplies to three countries completely (Bulgaria, Finland and Poland), after they refused to join Russia’s gas-for-rubles scheme introduced by presidential decree in May. Many European countries and companies have joined the scheme, unable to replace Russia’s gas with alternative sources of energy. However, the EU has pledged to reduce Russian gas supplies by 90% by 2023.

Gazprom’s reduction of the gas flows in June has unnerved Europe’s governments of which 12 have declared an “early warning” alert as part of the EU’s three-point energy crisis warning system. Germany has already gone to the second stage of “alert” and is preparing to restart mothballed coal-fired power stations just in case there is insufficient gas in storage when the weather turns. In the final stage of “emergency” governments have the power to take control of what limited energy is available and introduce a rationing system.

First official results from Bosnian elections put nationalists ahead after exit polls predicted losses
9 hours ago
Georgian MPs want to rid the country of oligarchs, but not all of them
10 hours ago
Hungary agrees on deferred payments with Gazprom for winter gas deliveries
10 hours ago
US sanctions Russia’s CBR head Nabiullina and other officials
10 hours ago
Russia prepares for new attacks against Ukraine from Belarusian territory
10 hours ago