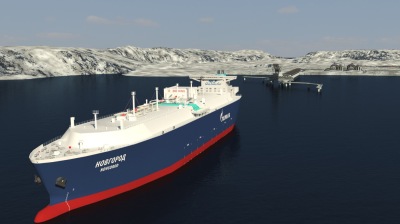 9M 2022 Russian LNG exports to Europe have risen by a staggering 50%. / bne IntelliNews
By Richard Lockhart in Edinburgh November 18, 2022

Russian exports of LNG to the Europe rose a staggering 50% in the first nine months of 2022, according to EU figures, even as volumes of pipeline gas fell by 80%, as Europe’s need for gas trumped the EU’s efforts to cut dependence on Russian gas.

Alongside the EU’s purchases of LNG from the US and Qatar, Novatek’s Yamal LNG project on the Arctic Sea coast is also sending tankers to Europe.

From January to September 2022, the EU imported 16.5bn cubic metres of Russian LNG, up from 11.3 bcm in the same period last year, Politico reported.

What this means is that Europe’s efforts to present a united front to Russia on gas imports is failing, and blows wide open Brussels’ ambitions of becoming independent of Russian gas imports.

Meanwhile, the EU’s proposed price cap on gas could lead to volatility in the market, and one EU official said that the cap could be abolished immediately if not enough gas arrives in Europe and the economy suffers.

There are fears that if Europe is not able to pay premium prices for LNG, even from Russia, then cargoes will switch to Asia, leading to potential fuel shortages in Europe.

The EU said on November 17 that it proposed to apply a cap to the TTF hub, Europe’s leading gas benchmark.

The EU said it wanted to send a message to the market that Europe was not willing to pay high prices during periods of volatility.

Since Russia invaded Ukraine, the TTF has seen abrupt movements, fuelled by speculation over the Kremlin's next move. This has led to record-breaking prices, particularly in summer, when the benchmark reached a record high of €349 per MWh.

So far in 2022, France, the Netherlands, Spain and Belgium have been the main importers of Russian LNG, said energy market monitoring group Montel, with a third of Russian LNG arriving in France and nearly a quarter in Spain.

France’s TotalEnergies is a minority shareholder in Yamal LNG, while many countries are locked into long-term deals to import LNG form the terminal.

Another option is for Europe to buy up spot cargoes on the world market, outbidding Asian buyers for cargoes from Sakhalin. These can then be swapped for cargoes already in Europe, without having to wait for physical ships to make the voyage from Asia to Europe.

Meanwhile, the UK has officially banned LNG imports from Russia from January, even though the move is purely symbolic, as the UK had already stopped buying Russian chilled gas.

It also signals that Europe’s current dash for LNG will not insure the continent against its continued need for gas coming from Russia.

Russia is taking advantage of high gas prices, and is increasing its total LNG exports to Asia and Europe, which now account of 80% of its exports.

The demand for LNG in the EU will likely increase further in 2023. While in early 2022 the EU bought up Russian pipeline gas fill storage facilities, that option is no longer available.

Indeed, buying LNG could expose the EU to further pressure from the Russian government in 2023 as Europe again needs to fill its storage tanks for winter 2023-2024.

EU sanctions on Russian LNG date back to April, when it banned exports of LNG production equipment to Russia as part of the EU’s fifth sanction package.

Polish proposed ban on Russian rubber may give the European tyre industry a flat
7 hours ago
Prague to have a new municipal government after record-long negotiations
12 hours ago
Party congresses of Hungarian opposition demonstrate deep divisions
12 hours ago
At least 500 dead after huge earthquake hits Turkey, Syria in early hours
12 hours ago
Turkish minister tells US ambassador ‘Take your dirty hands off Turkey’ as sanctions sparks fly
18 hours ago