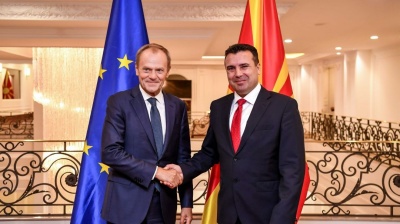 The president of the European Council Donald Tusk urged EU leaders on September 17 to launch membership talks with Albania and North Macedonia in October as they promised in June.

In June, the European Council delayed the decision to launch membership talks with North Macedonia and Albania but said they will go back to the issue no later than in October. North Macedonia has been a candidate country since 2005 and Albania since 2014.

During his visit to Skopje, Tusk praised North Macedonia for solving the name dispute with Greece, for concluding a friendship treaty with Bulgaria, for its contribution to solving the migrant crisis as well as for solving the difficult political crisis in the country.

Tusk said that within the last two years North Macedonia has done everything required by the European Commission to be able to launch the accession negotiations.

“Skopje is the best possible place where I would like to appeal to the leaders of the European Union: Now you do your share. Because North Macedonia has already done its share,” Tusk said.

The same day Tusk also visited neighboring Albania. In a statement Tusk underlined that he discussed the importance of the country maintaining a solid track record as regards the rule of law and the fight against corruption and organised crime.

“But equally important is that Albania’s and the region’s accession to the EU is in the best interest of the whole of Europe,” Tusk said.

The EU General Affairs Council will discuss the topic of EU enlargement in October.

Albanian opposition parties, which launched a wave of sometimes violent protests against the government earlier this year, have said they will hold off from further protests until after the EU decision.

Law enforcers in Albania and Italy have arrested 37 members of an organised criminal group that trafficked large quantities of illegal drugs, said the European Union Agency for Criminal Justice ... more