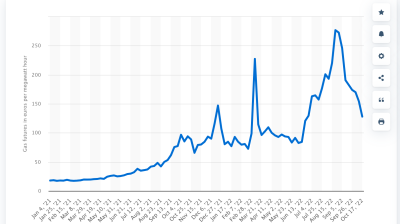 The front-month contract at the Dutch TTF gas hub dipped to close to €113 per MWh ($1,200 per 1,000 cubic metres) on October 18, representing its lowest level since June, as a result of warmer than usual weather, and ample LNG supply.

Russian gas supply dropped to an all-time low of 2.3bn cubic metres per month in September and is at risk of falling further if transit is disputed through Ukraine over a payment dispute. So far, however, this has been offset by reduced demand and increased LNG supply.

European gas prices have fallen substantially since spiking in late August to an all-time record, as LNG supply remains buoyant while EU gas storage facilities have now been filled to close to 93% capacity. The November contract at TTF had spiked at €350 per MWh on August 26, after it was announced that the Nord Stream 1 pipeline would be taken offline.

The recent steady decline comes as the European Commission puts off coming up with a concrete proposal for a wholesale gas price cap, amid continuing disagreement among EU member states about what form the cap should take. The Commission said on October 18 it would ask EU countries for their approval to draft plans for a temporary “maximum dynamic price” on transactions at TTF. But it will only consider this as a “last-resort measure,” and only if that price limit meets certain conditions. The cap has been under debate in Europe now for months.

Gas futures prices are significantly more bullish beyond November, however. The December, January, February and Q1 2023 contracts are all trading at €140-150 per MWh, signalling the market’s concern that supply will be scarce if it proves to be a cold winter and if there are supply disruptions.

EU acts to conserve gas in 2022 with new regulations

In an effort to mitigate the energy crisis in 2022 the EU has introduced a raft of reforms to better preserve its gas supplies, but with the International Energy Agency (IEA) predicting there will be ... more

Outcome of the war in Ukraine remains up in the air, but oil markets are pricing in a quick resolution

The range of outcomes following Russia’s invasion of Ukraine is impossibly large, but the oil markets are currently pricing in a short war, with oil prices returning to normal by the end of this ... more