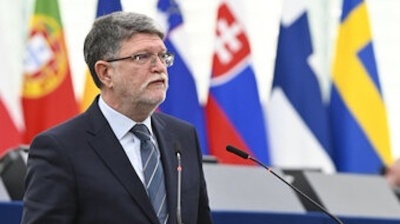 Tonino Picula says MEPs want a transparent and accelerated expansion process "for those who deserve it". / europarl.europa.eu
By bne IntelliNews November 23, 2022

MEPs voted by an overwhelming majority in favour of a recommendation calling for the enlargement process to be “reenergised” – but only for countries that align with EU sanctions policy on Russia.

Singling out Serbia, which has refused to join Western sanctions on Russia, the resolution said accession negotiations with the country “should advance only if the country supports EU sanctions against Russia and makes significant progress on EU-related reforms”.

This was reiterated in a statement from the Group of Socialists and Democrats, which said the EU should also reconsider EU funds for the Serbian regime unless it joins the sanctions.

The vote followed repeated calls from MEPs for Serbia to align with EU policy, and the document stressed the “importance for the EU of prioritising the alignment of accession countries with the EU’s common foreign and security policy”.

The recommendation was adopted by 502 votes in favour, with 75 against and 61 abstentions.

European Parliament rapporteur for the New Enlargement Strategy Tonino Picula commented: “By adopting solid recommendations on how future enlargement policy should be implemented, we can once again set the tone and standards to enable the European Union to grow and prosper. We wish to ensure that the EU remains an evolving community of European states open to like-minded democracies joining it, sharing common values and interests.”

“While our national team [Croatia] was playing, the European Parliament just confirmed my recommendations on the New Enlargement Strategy with 502 votes!” Picula, pictured wearing a Croatia scarf to support his World Cup team during part of the debate, later commented on Twitter.

“We want a transparent and accelerated expansion process for those who deserve it and the abolition of funds for those regimes that do not support EU values,” he added. 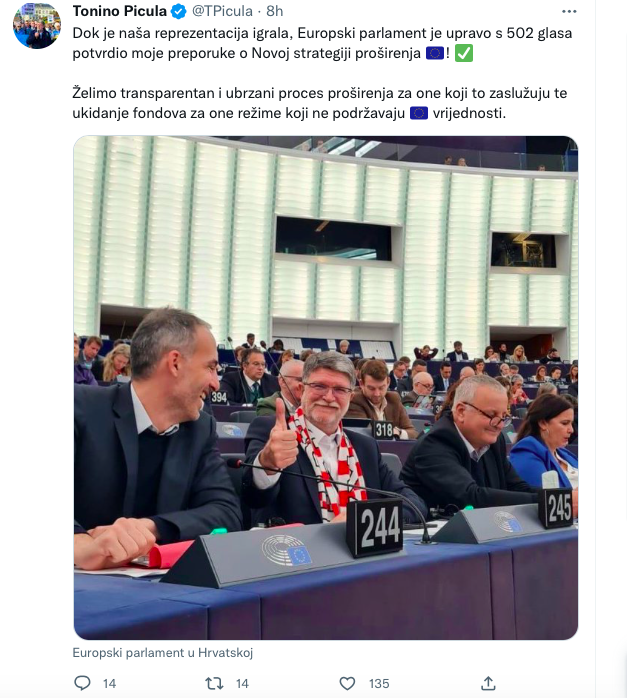 As well as the need to align with EU policy – the recommendation talked of the bloc being open to “like-minded democracies” joining it – the recommendation also called for accession negotiations to be concluded by 2030, and for changes to the decision-making process including by accepting new members by qualified majority instead of unanimity. The statement also stressed that there should be no alternatives to accession for aspiring members.

“In light of the growing Russian threat to European peace and stability, an enhanced enlargement policy remains the strongest geopolitical tool at the EU’s disposal … To be a more credible and efficient global player, the EU should reform its decision-making procedures for the accession of new members,” the recommendation said.

Accession candidates and potential candidates from the Western Balkans have become increasingly disillusioned as the accession process has dragged on. Some countries have had their progress delayed by bilateral disputes with existing member states that are unrelated to the EU, notably the vetoes on North Macedonia’s progress imposed by first Greece and later Bulgaria.

MEPs called for democratic reform and the rule of law to be put at the forefront of the enlargement process, and for the EU to reward candidate countries when they make sustainable progress.

COMMENT: The new Cold War will be different, and not only because of China
INTERVIEW: Helen Rodwell, head of CMS’ corporate practice in CEE
RBI's 2022 profits soar to €3.6bn, with Russian operations representing more than half

Polish proposed ban on Russian rubber may give the European tyre industry a flat
6 hours ago
Prague to have a new municipal government after record-long negotiations
11 hours ago
Party congresses of Hungarian opposition demonstrate deep divisions
11 hours ago
At least 500 dead after huge earthquake hits Turkey, Syria in early hours
11 hours ago
Turkish minister tells US ambassador ‘Take your dirty hands off Turkey’ as sanctions sparks fly
17 hours ago