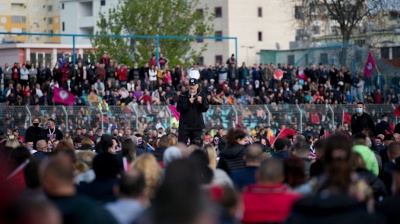 Supporters of Socialist leader and Prime Minister Edi Rama in Durres ahead of the election.
By bne IntelliNews April 25, 2021

An exit poll released shortly after voting ended in Albania on April 25 indicates an extremely close race between the ruling Socialists and the Alliance for Change formed by the country’s two main opposition parties.

The exit poll by Euronews in collaboration with MRB puts Prime Minister Edi Rama’s Socialists on 43.3-47.5% of the vote, with the Democratic Party not far behind on 40-44% and its ally the Socialist Movement for Integration (LSI) on 6-9%.

At this stage either side could come out on top: the Socialists are set to take between 68 and 72 seats in Parliament, the Democrats 60-64 and the LSI six or eight. There are 140 seats in the parliament, meaning either side would need 71 MPs to form a majority.

Albanian State Election Commissioner Ilirjan Celibashi stressed that it is too early to say who won the election. A result is expected within 48 hours.

Celibashi wrote on Facebook that he “calls on electoral entities to follow the following process calmly, as no one knows who won this election. We have to wait for ballots to be counted, to figure out who is the winner of the #April 2021 election.

Despite this appeal, representatives of both the main parties have already claimed victory.

Democratic Party leader Basha said shortly after polls closed that the election was a “clear victory” for the opposition.

“Thank you to all Albanian citizens for having chosen change. This is a clear victory for the Albanian people, a clear victory for the Alliance for Change. The will of the people is in the ballot boxes and I am fully confident that the counting teams and commissioners will complete the process with responsibility, patience and according to the law,” said Basha in a statement carried by Albanian media.

Meanwhile, Tirana mayor Erion Veliaj, a high-profile member of the Socialist Party, told a press conference that his party’s projections indicate it will remain in power with at least 72 seats in Parliament.

“It’s been a long but beautiful day and I expect to close it that way. The first good news we got is that exit polls show us as the winners. The second good news is that our nationwide projections estimate over 72 mandates. We will have to wait patiently until the counting process concludes,” Veliaj said, reported Euronews.al.

Rama took a more measured tone, urging Albanians to stay at home and wait for the result. “Now is the time for citizens to follow the continuation of this process from home,” the prime minister said, as reported in the Albanian media.

“Albania must emerge victorious from this [election] process and not only the party that will go on to govern the country,” he added.

Despite expectations of a very close race and the intense rivalry between the main parties in the run-up to the election, turnout was around 48%, only slightly up on the last election four years ago, according to preliminary data.

Several incidents were reported on election day. A man attacked a police officer with a knife at a polling staton in the town of Puke. Another man arrived at a polling station in Fier with a Molotov cocktail and threatened to burn the ballot boxes, but was removed by police. There were also several reports of scuffles between supporters of different political parties, and attempts to photograph ballot papers, which is banned in Albania. In Durres, two people were arrested with envelopes of cash, on suspicion of attempting to buy votes, a police statement said.

A car broke through barriers and drove towards people gathered on Tirana’s central Skenderbeg Square, but was stopped by a member of the crowd. However, according to Albanian media reports the driver was high on drugs and the incident was not politically motivated.

The events on election day followed two shootings of party activists in the week before the election. On April 19 27-year-old Bledar Okshtuni was shot in the leg with a pistol at the offices of the opposition Democratic Party in the town of Kavaja. Two days later, Socialist Party activist Pjerin Xhuvani was killed and four people were injured in a shooting in the Albanian city of Elbasan. The assailant was a bodyguard of opposition politician Gazment Bardhi of the Democratic Party, who told a press conference that the confrontation broke out over money that was allegedly being distributed to voters from a car owned by a Socialist supporter.

The shootings came at the tail-end of a bad tempered campaign period that has seen several other physical confrontations between rival supporters of the main parties. The rhetoric used by politicians was also concerning as tensions rose in the run-up to the vote.

After eight years in power, much of Rama’s campaign has focused on bringing investment into Albania and specifically on investments into major infrastructure projects like new ports and airports – he envisages raising the number of international airports in the country from two at present to four or five. The prime minister has also sought to capitalise on his handling of the pandemic and the November 2019 earthquake. However, critics have warned that such high-profile projects won’t do much to address the concerns of ordinary Albanians, which are focused on the lack of jobs and mass emigration, especially of young people.

Basha, by contrast, is offering a fresh start to voters disillusioned after eight years of the Socialist Party. As it prepares to return to the parliament, the Democratic Party has been working to show voters it is ready to govern responsibly and guide Albania towards EU accession. While all the main parties want to take Albania into the EU, Basha has been especially vocal on this issue and has committed to launching accession talks within 100 days should he become PM. He has also repeatedly accused the Socialist government of corruption and claimed it is controlled by oligarchs.

As the results are counted, international observers appealed for calm.

“Voters in Albania turned out in full force to express their will. Election & law enforcement authorities have the duty to ensure integrity of the vote. Candidates and leaders, too, have their duty: not to presume results but to accept the judgment of voters when the count is finalised,” said US Ambassador Yuri Kim.

After the vote “all sides should wait patiently for the results and respect the outcome of the elections by @KQZShqiperi [the Albanian Central Election Commission]”, wrote Luigi Soreca, EU Ambassador to Albania, on Twitter.