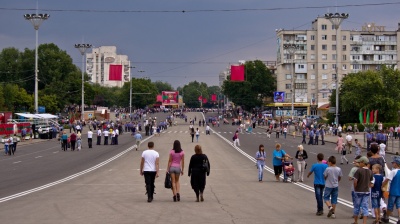 What and where is Transnistria?

A small separatist republic within Moldova, Transnistria is a long, thin stretch of land between the Dniester river and Moldova’s border with Ukraine.

A secessionist movement emerged in the final years of the Soviet Union, a time when Moldovan politicians were talking of unification with Romania – anathema to the mainly ethnic Russian population of Transnistria. After a civil war that ended in July 1992, the self-declared republic, which calls itself the Pridnestrovian Moldavian Republic (PMR), has been de facto independent since the early 1990s, and has political, economic and military backing from Russia, though neither Russia nor any other state has formally recognised it as independent.

Why is it in the news now?

There were a series of still unexplained attacks on targets within Transnistria on April 25 and 26 that revived fears Transnistria — and Moldova as a whole — might be dragged into the war in neighbouring Ukraine.

First, the empty headquarters of the Ministry of State Security (MGB) in the Moldovan separatist republic of Transnistria came under attack from a grenade launcher later identified as a RPG-27 Tavolga, produced in Russia and also in service in Transnistria, Jordan and Gabon, on the evening of April 25, Easter Monday.

The following morning, two explosions destroyed the biggest telecommunications towers in Transnistria at the Pridnestrovian Radio and Television Centre (PRTC) in the town of Maiak, Grigoriopol district.

Is Transnistria likely to be used to attack Ukraine or Moldova?

Ever since Russia’s invasion of Ukraine in February, there has been speculation that – as a Russia-backed territory on Ukraine’s western flank, with Russian troops stationed in it – Transnistria could be used to open a fourth front in the war in Ukraine.

This was fuelled by a video of Belarusian President Aleksandr Lukashenko with a battle map that went viral on social media. The map appeared to indicate Moldova was part of Russia’s invasion plans, as an arrow pointed from the Ukrainian port city of Odesa into Transnistria.

We wrote earlier that as the Russian military presence in Transnistria is very small it is unlikely to be used to open a new front in Ukraine. Secondly, when it comes to speculation about an attack on Moldova, it’s important to point out that Moldova, unlike Ukraine, has declared its neutrality and has not voiced any ambitions to join Nato.

Since then, however, a Russian general openly announced plans to occupy Transnistria. Brigadier General Rustam Minnekayev said on April 22 that the Russian army plans to take Ukraine's Donbas region, then create land corridors to both the Crimea and Transnistria.

“[Control over the Donbas region] will provide a land corridor to the Crimea, as well as influence the vital facilities of the Ukrainian [military forces], Black Sea ports through which agricultural and metallurgical products are delivered to [other] countries," Minnekayev said, according to Tass.

"Control over the south of Ukraine is another way out to Pridnestrovie [Transnistria], where there are also facts of oppression of the Russian-speaking population,” he added.

The attacks in Transnistria were followed by claims by several Russian commentators that Nato member Romania was planning to seize control of the separatist republic. While this was completely unfounded, it raised questions about Russia’s intentions towards the region. Russia has a history of using threats to its nationals – and the citizens of breakaway regions of fellow post-soviet states tend to have been issued Russian passports en masse – to justify military action.

What is the government of Transnistria saying?

Officials in Tiraspol have been pretty quiet since the invasion. They only broke their silence on March 4, after the Moldovan government announced it had submitted a formal application for EU membership. That didn’t go down well in Tiraspol, which issued a statement reasserting its independence and saying the request ignored the negotiations aimed at reaching a settlement to the Transnistria conflict.

After the attacks on April 25 and 26, President Vadim Krasnoselski issued a statement saying initial indications linked them to Ukraine.

Who’s in charge in Tiraspol?

Sheriff supported Krasnoselski, and since the 2020 general election it has controlled virtually all the seats in Transnistria’s parliament, most of which are held by members of the Sheriff-backed Obnovlenie (Renewal) Party.

Aside from the government, Sheriff’s assets include the Sheriff supermarket chain, Sheriff petrol stations, construction companies, a TV channel, a publishing company and the $200mn football stadium in Tiraspol that hosts the highly successful FC Sheriff Tiraspol football team. In 2021, FC Sheriff became the first Moldovan team to reach the group stages of the UEFA Champions League and scored a shock victory over Real Madrid. Its manager Yuriy Vernydub was last seen in army uniform in Ukraine, preparing to fight the Russian invasion.

Perhaps the best indicator of what life is like is that Transnistrians have voted with their feet; the population has dropped by almost half from 679,000 in 1989 to an estimated 347,251 as of 2021.

Aside from that, Transnistria is visibly very different from the rest of Moldova, as it retains many of the symbols of the old Soviet Union, with statues of Lenin still standing and a hammer and sickle on the national flag. The republic's small size and dubious international status have kept the international companies present elsewhere in the region away.

What’s the economy based on?

The rebel republic effectively gets Russian gas for free as the gas is delivered there but the bill is sent to Chisinau; as of 2021 there was an outstanding debt of $7bn. The gas is burnt at the Cuciurgan power station controlled by Russia’s Inter RAO, and the cheap electricity has enabled a lucrative crypto-mining industry to emerge.

Smuggling used to be big business too, but less so since the authorities in both Moldova and Ukraine tightened border security.

Meanwhile, agricultural and manufacturing companies in Transnistria have benefited from Moldova’s Deep and Comprehensive Free Trade Area (DCFTA) deal with the EU that has allowed Transnistrian firms to reorientate their exports westwards.

What use is Transnistria to Moscow?

Russia’s actions in Transnistria are typical of the divide and rule playbook also used in other post-Soviet republics Georgia and Ukraine. Initially, Moscow’s backing for the separatists ensured that Moldova wouldn’t be able to unite with Romania. Ever since then, Russia has been assured of a say in whatever happens in Moldova thanks to its position in Transnistria.

Will the conflict ever be resolved?

Negotiations have been ongoing for years in the 5+2 format (Moldova and Transnistria, plus Russia, Ukraine and the OSCE as mediators, and the US and EU as observers) in an attempt to reach a peace settlement, but any progress in the talks has tended to be on specific issues such as movement of citizens and trade, rather than the fundamental question of whether Transnistria will ever rejoin Moldova and if so on what terms.

This explainer is an updated version of an article published by bne IntelliNews on March 9, 2022.