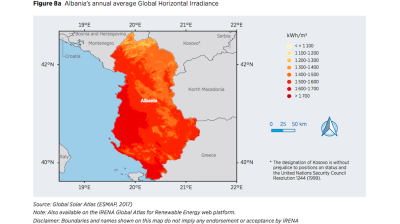 Albania has “extensive” opportunities for solar energy generation, as well as potential to produce wind and geothermal energy, says a new report from the International Renewable Energy Agency (IRENA).

Albania has already launched its first solar power projects as it aims to diversify electrify generation away from hydropower, which currently accounts for 95% of electricity generation capacity.

According to a 2017 study from the agency, Albania’s technical potential for the deployment of solar PV is estimated at 2,378 MW, with production of 3,706 GWh annually.

The report says solar insolation is very high across most of Albania at over 1,500 kWh/square metre a year, and the country has one of Europe’s highest numbers of sunshine hours per year. This gives the country “significant potential” for development of solar PV for power generation and solar thermal for heating purposes.

Meanwhile, according to IRENA’s estimates, under a low-cost capital scenario, Albania has a cost-competitive wind potential of up to 7,400 MW. Annual average wind speeds in Albania range from 3.3 to 9.6 metres per second. Although the country doesn’t yet have any wind power plants, since the introduction of the wind feed-in tariff (FiT) support scheme, 70 applications for the construction of wind plants up to 3 MW have been received, and three have been authorised for construction.

As elsewhere in Southeast Europe, Albania has low-enthalpy geothermal energy resources, most likely applicable for heating rather than power generation. These are mainly in the Kruja Geothermal Area that extends from the Adriatic Sea in the north across the country towards the Greek border in the south.

Biomass use is mainly through burning firewood for heating. Although the country has a plant with capacity to produce 100 kilotonnes of biofuels a year, it operates at only 10-15% of capacity on average. IRENA estimates that biogas and biomass power production could reach 86 MW (495 GWh annually) by 2030.

Although Albania’s current reliance on hydropower means it has one of the region’s cleanest energy mixes, it also makes Albania vulnerable to weather patterns and – in the longer term – to climate change.

“Aside from the socio-economic implications of its extensive reliance on hydropower, Albania is among the most vulnerable of South-East Europe’s countries to climate change, according to the World Bank, and changing weather patterns have already resulted in increased temperatures, decreased precipitation and more frequent extreme events such as floods and droughts,” warns the report.

The transport sector relies mainly on petroleum products, and demand is rising. Albania is the largest producer and exporter of oil in the region but most is exported as unrefined crude oil, and the country imports all of its refined petroleum products.

Tirana asked IRENA to carry out the Renewables Readiness Assessment (RRA) study as the government seeks to encourage renewable energy development and comply with its regional and international commitments.

“The RRA findings come at the right time to help us establish a clear strategic roadmap for renewables in Albania. While the market has witnessed considerable advances in recent years, we are now more determined than ever to step up the investments that will shape our energy future,” commented Minister of Infrastructure and Energy Belinda Balluku in a foreword to the report.

The existing National Energy Sector Strategy sets the target of a 42% share of renewable energy in total primary energy supply (TPES) by 2030.

Army sent into Tirana airport after strike grounds all flights

Russia's consumer price inflation in March 2021 posted 0.7% month on month and 5.8% year on year (versus 5.7% y/y in February and 5.2% y/y in January), according to the latest data from RosStat statistics bureau.

Romania's retail sales index increased by 1.5% y/y in January-February compared to the same period last year — softer growth than previously but still positive despite the worsening of the pandemic in early 2020.

Minor outflows from Russian equity and bonds, despite talk of war with Ukraine
2 days ago
Labour demand rebounds in Croatia
4 days ago
Slovenia’s blue-chip index at its highest level in over a decade
5 days ago
Russia's inflation seen peaking at 5.8% in March
5 days ago
Romania’s retail sales growth moderates to 1.5% y/y in Jan-Feb
6 days ago