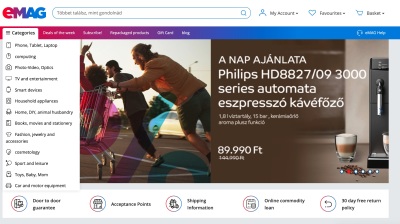 GVH said the merger would not reduce competition on the market for the sale of electronic goods by a significant degree, adding that the merged companies' market share would still be under 20%.

Extreme Digital and eMAG announced in March plans to merge into an entity in which eMAG holds a 52% stake and Extreme Digital a 48% stake. The companies' combined revenue is expected to reach around HUF70bn (€210mn) a year.

The merger will pave the way for eMag’s to enter into five new regional markets where Extreme Digital is already present: Austria, Croatia, the Czech Republic, Slovakia, and Slovenia. Besides Hungary eMag currently operates in Romania, Bulgaria, and Poland.

Hungarian webshops made up only half of the amount, as price-conscious customers are turning to foreign retailers such as Amazon or Chinese Alibaba.