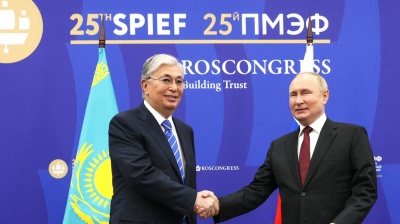 All smiles. The question is whether the remarks made by Tokayev (left) held any surprises for Putin. / Kremlin,ru
By Peter Baunov in Nur-Sultan June 20, 2022

Face to face with Vladimir Putin, Kazakh President Kassym-Jomart Tokayev on June 17 caused some surprise when he stated that Kazakhstan did not recognise the Luhansk People’s Republic (LPR) and Donetsk People’s Republic (DPR) breakaway territories of Ukraine as independent republics. He described them as "quasi-state formations".

His remarks, made during an appearance with the Russian president at the St Petersburg International Economic Forum (SPIEF), amounted to a reaffirmation of Kazakhstan’s stance on Russia’s invasion of Ukraine, but some in the audience will have taken it as rather a bold reaffirmation given who Tokayev was sharing the stage with.

The Kazakh president, meanwhile, also apparently refused to accept an order of merit of the Russian Federation named in honour of a saint of the Russian Orthodox Church, Alexander Nevsky. Accepting the order would have been a symbolic acceptance of a token of allegiance with Russia, though Tokayev has previously refused similar accolades from other countries.

Tokayev’s perceived boldness was met with speculation from observers that the Kremlin was not going to like his “disobedience”, especially given how the Russia-led Collective Security Treaty Organisation (CSTO) in January showed support for Tokayev’s continued rule over Kazakhstan by deploying troops that helped quell the nationwide unrest that broke out in the Central Asian nation.

Indeed, one of the first developments in relation to Russia and Kazakhstan that occurred on June 17, shortly after Tokayev’s words, was an announcement that the Caspian Pipeline Consortium (CPC) would be periodically halting oil shipments in order to allow the Russian Emergency Situations Ministry to defuse around 50 WWII era mines it had found on the Black Sea seabed. Kazakhstan relies significantly on the CPC infrastructure for oil exports.

Russian authorities did not clarify how long the process would take, but the move chimes with how Russia slowed down oil transit at the CPC pipeline back in March, claiming it needed to conduct repairs due to storm damage. Kazakhstan has already diversified its oil shipping routes since then and, as such, Kazakh authorities responded to the news by saying that this month’s disruption would not significantly affect Kazakhstan’s oil shipping speed.

It is also worth noting that the CPC warned earlier in a statement of reduced shipping speeds at its gas export terminal near the Russian Black Sea port of Novorossiysk between June 15 and 25, while representatives of the Russian Emergency Situations Ministry conducted seabed surveys. A statement from the company noted that “in the past, coastal sea areas [where the export terminal operates] have repeatedly been a war zone”. The statement appeared to be mostly a reference to WWII. According to earlier preliminary surveys, “hydroacoustic and magnetic targets have been identified that require additional examination and disposal”, CPC added in its statement. Russia’s regulations required the elimination of “residual mine danger” prior to the start of operations that touch the seabed, CPC added.

The Russian invasion of Ukraine has significantly raised risks of navigation in the Black Sea, as it is believed that both sides have laid sea mines.

Another eyebrow-raiser of the SPIEF event was the Kazak president’s choice to criticise Russian Duma deputies over past comments questioning the independence of Kazakhstan.

It is likely that the Kremlin top brass understands that Kazakhstan is attempting to evade the Western sanctions’ line of fire by not cozying up too close to its economic and political ally. Kazakhstan staying out of sanctions is useful for Russian firms. Some have already started using Kazakhstan’s territory as a buffer zone to bypass effects of sanctions back home. Moscow, overall, should be able to see that a non-sanctioned Kazakhstan is more beneficial for Russia’s economy than a sanctioned one.

In line with this theme, Tokayev called for a new trade strategy for the Moscow-led Eurasian Economic Union (EEU).

"It would be appropriate and useful to engage in the development of a new trade strategy within the EEU, given the new reality," he said at the SPIEF session. "Instead of countersanctions, which are unlikely to be productive, it would be advisable to exercise a more active and flexible trade policy targeting a wide range of markets in Asia and the Middle East."

He said the goal of reinforcing the EEU remained a priority for the country.

"Kazakhstan could play a useful role as a buffer market," he said. "In general, the ultimate success of Eurasian integration depends a lot, if not to a significant extent, on the efficacy of our shared trade strategy."

“In the 10 years to come, the traditionally friendly countries such as China, India, countries of the Middle East, South and Southeast Asia could be major investors in the economies of our region. China has already become the main economic and foreign trade partner of Kazakhstan, with over $22bn of investment in the past 15 years,” added Tokayev.

Tokayev, who is also being watched closely by Kazakh citizens, most of whom support Ukraine in its conflict with Russia, also restated a number of ongoing efforts to create tighter cooperation with Russia, including agreements to bring branches of Russian universities to Kazakhstan. At home, such moves only convince the already politically beleaguered Kazakh population that Tokayev still remains loyal to Russia.