Fastest shrinking EU states are from Southeast Europe and the Baltics 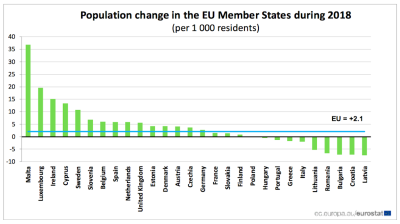 The fastest shrinking EU member states in 2018 were all new members from the Central and Southeast Europe region, new data from Eurostat shows.

This was in contrast to the overall rise in the population of the 28-member bloc. On January 1, 2019, the EU’s total population was estimated at almost 513.5mn, compared with 512.4mn a year earlier.

The increase was down to migration, as more deaths than births were recorded in the EU during 2018, for the second consecutive year.

States across Central and Eastern Europe are experiencing a long-term population decline due to a combination of low birth rates and mass emigration. Half a dozen countries in Central, Eastern and Southeast Europe are set to lose two out of five of their citizens by the end of this century and a few counties will lose half their population, according to projections from the UN.