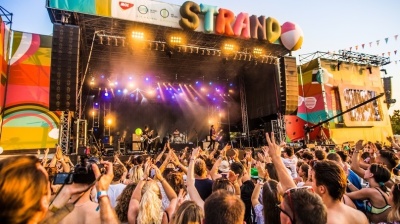 Smaller festivals will not be allowed after August 15, government decides.
By Tamas Szilagyi in Budapest July 31, 2020

Hungary's government has maintained restrictions on gatherings after August 15, officials announced on July 30. The decision means that indoor and outdoor gatherings of more than 500 will still be banned.

The government's goal is to prevent a second wave of infections and relaxing the rules may carry risks, cabinet chief Gergely Gulyas said at a weekly press briefing on Thursday. The aim is to ensure that the school year starts in regular order on September 1, he added.

The decision comes as no surprise after the government called off all festivities for the August 20 national holiday for the first time.

Out of the seven neigbhouring countries, Romania and Serbia are deemed medium-risk countries. Hungarian holidaymakers and foreigners face a two-week quarantine when coming from these countries. Citizens from countries with a red code, such as Ukraine, are banned from entering the country.

Industry insiders say the restrictions will be very painful for the music industry. CEE's largest open-air festival Sziget had already been put off.

The one-week gathering with an annual budget of HUF10bn (€29mn) attracted more than 0.5mn visitors last year. Sziget, the company that organises VOLT, and Balaton Sound festivals had already been scrapped these two mass events, which attracted 400,000 music fans combined in 2019.

The government's decision will mean that a dozen smaller festivals with 10,000-50,000 visitors will not be held. After emergency rules were lifted in June, many had postponed these events to the end of August or September.

The consequences will be unpredictable, local musicians and bands said. The industry, comprising tens of thousands of people including staff, has not received any help from the government. On Thursday, cabinet chief Gulyas said the government earmarked HUF5bn to help out the sector, including HUF800mn for Roma musicians.

Musicians have expressed their dissatisfaction over the government’s decision on maintaining tough rules on concerts, while lifting the ban for sporting events.

Hungary's football cup final at the end of May and last rounds in the professional league were open to crowds. The music industry fumed at the double standards and the government's ambiguous reasoning. A couple of weeks ago Gulyas told reporters that the difference between concerts and football games is that at the latter fans can not buy alcohol.

"We need a better lie than that," commented Hungary's top rapper.

The music industry needs at least HUF40bn to survive the crisis, people familiar with the situation said.

The cancellation of the festivals is a major blow to the economy. One study shows that the summer lockdown for the festival season, including the spillover effects will cause a HUF440bn loss to the economy, or 1% in GDP.  Budget cuts at local governments will also negatively impact the music sector.