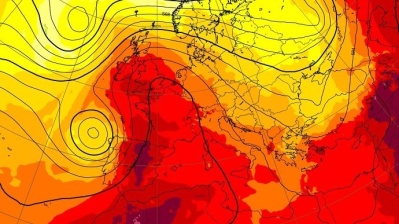 The heatwave that caused havoc in Western Europe is now moving into Central Europe. Temperatures in Southeast Europe are expected to peak over the weekend. / ECMWF
By bne IntelliNews July 21, 2022

Firefighters have been battling wildfires for days in Southeast Europe, ahead of an expected rise in temperatures to over 40C in many cities across the region.

The heatwave that set record temperates in the UK and contributed to serious wildfires in France earlier in the week is now moving eastwards into Central Europe, and temperatures are expected to peak in Southeast Europe on July 23.

Weather forecasts show the Western Balkan capitals of Belgrade, Podgorica, Sarajevo, Skopje and Tirana all with temperatures of 40C or over on Saturday.

According to the European Centre for Medium-Range Weather Forecasts (ECMWF), “A slow-moving high-pressure area has been and is still transporting hot air from North Africa over western and parts of central Europe … In combination with low precipitation rates over the last few weeks over most of these areas, this situation has been and is leading to a high risk of wildfire as currently observed on the Iberian Peninsula and France. The event is also associated with very high ozone levels.”

As the heatwave approaches Southeast Europe, large areas have already been affected by wildfires.

In Croatia, 137 farms have been damaged by wildfires, with an affected area of 95 hectares, Agriculture Minister Marija Vuckovic said on July 20. Hot and dry weather has caused fires across the country and some areas had to be evacuated.

Also on July 20, fires that were raging in Italy spread to Slovenia’s southwestern region of Kars, which has also been affected by blazes in the last five days.

Local residents were forced to leave their homes due to the fires. Over 300 firefighters were engaged in the operation in the Kars area. Kars firefighters were offered help by the army and the police who used helicopters to deal with the fires. The local residents helped equip the evacuation centre. Help was also received from neighbouring Italy, Croatia and Austria, 24ur reported.

Albania, Bosnia & Herzegovina and Montenegro have also struggled to deal with wildfires caused by hot and dry weather over the past few days.

In Bosnia, where over the weekend wildfires spread at the Boracko Lake area and other locations, the authorities asked Croatia for assistance on July 18, saying it was unable to deal with the fires spreading in the municipalities of Citluk, Capljina and Konjic.

In Montenegro, the army was called to help with wildfires in Herceg Novi at the Adriatic coast. The fire broke out on July 17 but the local authorities were unable to overcome it and asked for help by the army. Two military helicopters were sent to bring the fire under control, public broadcaster RTCG reported.

Climate change is a “risk multiplier” for the Southeast Europe region, which has already been identified as one of the world’s “warming hot spots” that will become increasingly vulnerable to heatwaves, droughts and other extreme weather events as global temperatures rise, according to a 2021 report from the OSCE and think tank and public policy consultancy Adelphi.

Tourists stay away from Montenegro as prices rival Cote d’Azur

Ukraine will receive $5.5bn in support from the US later this month
5 hours ago
John Malkovich to turn Skopje into Hollywood of the Balkans
5 hours ago
Envoy says start made on construction of Turkish attack drone factory in Ukraine
14 hours ago
Huge explosion rocks Russian airbase on the Crimean peninsula
18 hours ago
Russia cuts oil flow via Ukraine's Druzhba pipeline, blaming sanctions for blocking transit payments
18 hours ago