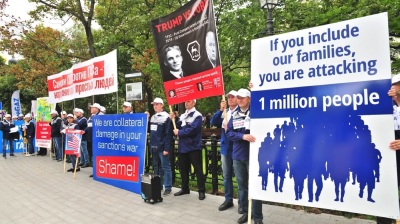 Worker from the GAZ carplant protest in Moscow outside the US Ambassador to Russia's residence
By bne IntelliNews July 4, 2019

As Moscow diplomatic dignitaries gathered at the US ambassador’s residence in Moscow for the July 4 Independence Day celebrations they were met by a picket line of workers from the GAZ car factory whose jobs are on the line thanks to US sanctions.

“Forgive me for sending this unsolicited email. But with the livelihood of hundreds of thousands of workers at stake and time running out, we realise we are running out of options,” Evgeniy Morozov, the chairman of the GAZ Workers' Council, said in an appeal emailed to the press.

The iconic car plant was set up by Lenin himself and is the kernel of the regional capital Nizhny Novgorod's local economy. Owned by prominent tycoon Oleg Deripaska, the plant was included in the April 2018 round of sanctions that personally targeted Deripaska’s assets.

While the sanctions on his Rusal aluminium producer were removed at the start of this year, as they were found to be unworkable and threatened to send global aluminium prices through the roof, those on GAZ have remained in place.

The plant has been on the ropes as a result, and Deripaska appealed to the government for RUB30bn ($469mn) support in April, saying tens of thousands of jobs are on the line as the plant is now facing bankruptcy.

Deripaska says he is ready to give up control of the GAZ Group automotive conglomerate and has been in talks on a possible joint venture with Germany’s Volkswagen to get the plant back on its feet, but the deal is stymied until the sanctions are lifted.

Due to the sanctions GAZ was forced to increase its loan portfolio by RUB20.7bn to RUB73.6bn in 2018. By the end of last year the company posted a loss of RUB11.3bn, while it has been forced to spend all its own funds, including profits, on increasing the working capital, the letter said.

The sanctions have been painful as they ban GAZ's foreign partners, which supply materials and parts, from working with the company. Production fell by 40% in the second half of last year due to the sanctions. This, together with the growing burden on working capital, means the company cannot service its loan portfolio.

With the economy of an entire city on the line a group of workers travelled to Moscow on July 4 to appeal to the US ambassador to Russia John Huntsman.

A group of fifty workers rallied on behalf of GAZ Group’s 40,000-strong workforce in front of Spaso House, the US ambassador's residence in Moscow. The protestors congratulated the American people on Independence Day, but sent a petition to Huntsman calling for the US government to lift the sanctions imposed on GAZ workers and invited the ambassador to visit GAZ auto plant.

“We understand how much Americans value the ideas of freedom and independence — the very ideas celebrated by this national holiday. On this day, we call on you not to deprive us, Russian workers, of the right to independence, right to work and to grow professionally and the right to a future. If the sanctions come in full force we will lose our foreign suppliers. This will bring production lines to a stop leaving us jobless. Our factories employ more than 40,000 people. Threat is looming not only over GAZ employees but also over the entire industry. Over 400 thousand people work for our suppliers, dealers and partners and depend on GAZ’s continued production. If you count their families, over 1 million people will lose their livelihood,” the protestors said in their petition to Huntsman.

GAZ was included in the April round of sanctions last year and while Deripaska has intensely lobbied the US government since, little progress has been made towards lifting the sanctions on the car plant.

The US Treasury Department (USTD) has repeatedly postponed imposing the main strictures of the sanctions, but the uncertainty means GAZ’s supply chains have been broken, endangering the plant. The sanctions implementation was postponed in June to November this year but the plant’s operation have been left in limbo over the uncertainty.

“Your government let us live until November 8. The catastrophe has been postponed for another four months. Even with these extensions, the development of our company has come to a halt while our future remains uncertain and unsecure. We are tired of living like that. Stop subjecting us to experiments, lift the sanctions and let people work in peace,” the workers said in a statement.

The workers emphasised the long-standing ties between GAZ and the US. Lenin roped Henry Ford into helping establish the original GAZ plant and there is replica of the iconic Model T Ford standing outside of the GAZ factory to commemorate the occasion.

“We are not involved in politics. We take no sides in any conflicts. We just produce motor vehicles people need. This is what we want to go on doing is the future. The US Government said that by imposing the sanctions it did not target common people. That is not true. GAZ Group is the factories where we work. Look at us. We are GAZ Group,” the workers said.