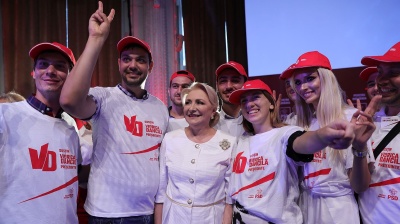 PM Viorica Dancila on the presidential campaign trail — but her government lacks a majority in parliament and the uncertainty could persist until general elections next year.
By bne IntelliNews September 4, 2019

The break-up of Romania's governing coalition increases political uncertainty ahead of a busy electoral calendar and amid a backdrop of rising macroeconomic imbalances, Fitch Ratings said in a comment issued two months ahead of its expected rating review.

Roughly one year ahead of the general elections, the cabinet of Prime Minister Viorica Dancila lacks a majority in parliament and six ministers in her team. The presidential elections in November hinder the opposition’s capacity to provide an adequate answer and form a majority, which risks keeping the country in a public administration hiatus.

The weakening twin deficits are seen by the rating agency as the key threat — a fact that is broadly admitted and also mentioned by the International Monetary Fund (IMF) in its Article IV Consultations and by fellow rating agency S&P when confirming Romania’s rating this September. Notably, Moody’s assumed that the “new government” would be able to reverse the 40% pension hike planned for next September. The government's capacity to address fiscal slippage is impaired by the political crisis, Fitch argues.

A weak administration or protracted political stasis could accentuate the policy challenge of improving medium-term fiscal and external sustainability, the rating agency stated in its comment.

Political uncertainty complicates economic policy at a time when fiscal and external metrics have weakened, the rating agency said. Persistent high fiscal deficits and a sharp deterioration in the balance of payments were mentioned by Fitch in May when affirming Romania’s BBB-/stable sovereign rating, as factors potentially triggering negative rating actions.

The corrective measures in the budget revision approved by the government in early August are seen by Fitch as insufficient to bring down the deficit to the budget target of 2.76% of GDP. The rating agency forecasts the deficit to widen to 3.4% of GDP in 2019, from 3% last year, and believes the government's projections rely on optimistic revenue assumptions.

Separately, Fitch assesses the current account deficit on a 12-month rolling basis to 4.95% of estimated GDP in June. Given that the deficit is not fully financed by foreign direct investment (FDI), the rating agency warns it could push up net external debt.