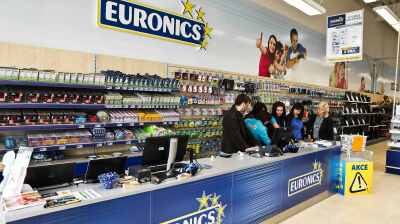 Electronics retailer Euronics reported HUF70bn in turnover in 2020, with the online unit accounting for 20% of the total, making it the largest domestically-owned B2C site and sixth overall.
By bne IntelliNews September 9, 2021

E-commerce is the engine of growth of the Hungarian retail sector, with double-digit growth in the last decade or so, but the market is dominated by foreign companies and is less developed than in the neighbouring Czech Republic.

B2C online sales accounted for about 7% of total retail sales in Hungary last year. This is below the EU average and is even considered low compared to other CEE countries.

Last year sales jumped 45% to €2.5bn, fuelled by lockdowns and changing consumer patterns. The trend continued in H1 this year, with sales reaching €1.4bn, up 30% from a high base. Online turnover in consumer electronics and computer products increased by 35-40% in 2020, one of the highest among various segments.

The online retail market was concentrated before the pandemic, but that trend has become even more pronounced, economic researcher GKI Digital said in a recent report. Consumers have moved towards large, well-known brands, which have typically responded with a steadily expanding range of products and faster delivery, and usually have a higher assortment and more secure, predictable stock.

The top three players generated HUF200bn in turnover, while the 15 biggest online retailers realised HUF380bn in sales, accounting for 41% of the market. The turnover of the top 10 grew by 54%, exceeding the market's 45% growth in 2020.

Hungary’s online market is dominated by foreign players. After four years, eMAG became the largest webshop in Hungary, followed by Extreme Digital in 2019, which had ruled the market for years. The companies, owned by South Africa's Naspers group, merged last year, putting them at the top of the market in terms of revenue at HUF130bn (€372mn).

German-owned MediaMarkt has been a dominant offline retailer since 1997 and since the 2010s it has been active on the online B2C market. Its online unit was merged into the group, making comparison for online sales difficult. In 2020 the unit realised HUF57bn.

Czech-based Alza embarked on an aggressive strategy in the highly competitive electronics retail market in 2018. By 2020 it became the third-largest B2C player with HUF33bn revenue.

Hungarian-owned electronics retailer Euronics, with 66 stores across the country, reported HUF70bn in turnover in 2020, up 10% in 2020. The online unit accounted for 20% of the total turnover, making it the largest domestically-owned company and sixth overall, with HUF18bn in revenue. Euronics, founded in 1989, has become the largest network specialising in consumer electronic products and accounts for 20% of the offline market. The company also weathered the stiff competition of multinational retailers and the emergence of online stores.

Kifli.hu, the Hungarian unit of Czech online groceries retailer Rohlik, invested heavily before setting foot in the market in 2020 and has produced outstanding results in its first year of operation. With HUF10bn in revenue, it beat its own targets and even outpaced the online retail revenue of hypermarket chain Auchan.

GKI Digital expects the robust growth of the sector to decelerate slightly due to supply chain problems and rising prices. This is more likely to affect foreign shops.

Before July 1, online retailers selling goods to EU consumers can import goods into the EU directly to the consumer VAT-free if the consignment of goods is valued at €22 or below. This ended on July 1,  and now all imports are subject to EU VAT. Sellers and facilitating marketplaces can collect import VAT on import consignments valued up to €150.