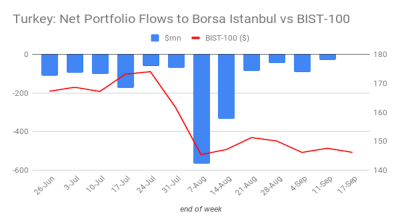 Non-resident investors sold a net $30mn of Borsa Istanbul equities in the week ending September 11, following their sale of $92mn worth in the previous week, Turkish central bank data showed on September 17.


Also in the week ending September 11, the free-float of airport operator Turkcell (TCELL) saw the biggest decline in terms of shares held by foreign investors, mainly due to the converting of shares previously held by Sweden’s Telia Sonera into publicly tradable shares (chart below from Is Invest online analysis tool).

On September 17, a weekly bulletin from the Capital Markets Board (SPK) showed that the authority had cut  the “direct market access” of UBS' London branch to Borsa Istanbul as of September 18 due to price and volume movements on the Turkcell trading board on September 15.

The move means the Swiss firm’s artificial intelligence algorithmic trading software can no longer function on the Borsa Istanbul.

“Sad to see Turkey's weight in MSCI Emerging Markets index hitting all time low at 0.3%,” Emre Akcakmak of EastCapital wrote on September 16 in a tweet (see chart below).

As of September 30, glassmaker Sisecam's companies Soda (SODA), Anadolu Cam (ANACM), Trakya Cam (TRKCM) and Denizli Cam (DENCM) will be delisted following a merger under the roof of Sisecam (SISE), the group said on September 17 in a stock exchange filing.

Garanti BBVA, which has lost 40% year-to-date in lira terms, is becoming a bigger and bigger headache for Spanish parent financial services group BBVA.

“TROUBLE? BBVA drops to lowest level since 1995 due to Turkey risk. BBVA holds almost 50% of the third largest Turkish bank Garanti,” Holger Zschaepitz of Welt wrote on September 16 in a tweet.

Hospital chain Medical Park (MPARK) fell out of the Borsa Istanbul stocks ranked as the most sold by foreign investors year-to-date, while Turkcell (TCELL) joined the group (chart below).

As of September 18, Emlak Konut REIT (EKGYO) remained the most active stock on the Borsa Istanbul looking back three months (table below).

Emlak is the flagship of the government’s unending construction boom policies. It has become popular during Turkey's latest and largest ever loan and home sales boom, which peaked in July and lost a limited amount of steam in August.