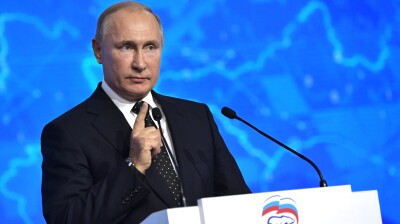 Russia's economic planners are preparing for a scenario where sanctions are never lifted and Russia will have to go back several generations of technology / wiki
By Alex Nice for FPRI BMB Russia in London April 28, 2022

In mid-March, Vladimir Putin gave his first substantial commentary on the economic consequences of Western sanctions: “Of course, these new realities will require deep structural changes in our economy, and I will not hide that they will not be simple.” Last week, the Central Bank of Russia (CBR) produced a very insightful analysis (Russian) on what this structural change will look like in the context of prolonged sanctions.

The Central Bank starts by noting that sanctions have caused a severe supply shock, affecting a wide range of imports, and is also encountering difficulties receiving payment for its exports because of restrictions on the financial sector. The authors are blunt about the scale of the disruption this will cause. High-tech products rely on extended and globalised supply chains, and “the removal of several links can paralyse the whole chain. So a high degree of localisation may not help if the products that are unavailable are unique and cannot be easily replaced.” This will lead to a long-term loss in productivity, particularly in the most high-tech sectors, and a lower potential rate of growth.

The paper sets out scenarios for “technological regression” in a range of sectors. In the first phase, which many companies are now in, firms will seek to compensate for the disruption to imports by drawing on inventories or finding new suppliers. In the absence of either of these, there will be a sharp fall in production, which could have spill-over effects to other companies and a sharp increase in business uncertainty. In phase two, as inventories are exhausted, it will become clear which supply chains have survived. But there will not be a typical business cycle characterised by “creative destruction” because expanding production still requires a recovery in imports, which will remain restricted.

The third phase, which could take several years, will mark a period of economic recovery on the basis of what the Central Bank calls “reverse industrialisation,” that is, a growth in industrial production on the basis of less sophisticated technology. At this point there will be a recovery in industrial and manufacturing employment.

There is not the space to examine all the issues raised by this analysis. But alongside the decline in the technological capacity of Russia’s economy, two things in particular are worth considering from this paper. First, the fact this paper has been produced indicates that Russia’s economic planners are explicitly preparing for a scenario in which sanctions are never lifted.

Second, import substitution is expected to drive an expansion of Russia’s manufacturing sector in the medium term, during the period of restructuring the sector will face intense disruption. Employment will shift from industry to services, from large to small and medium-sized enterprises (SMEs), and the informal sector will expand. These changes will have complex political and social consequences that the government will have limited funds to mitigate.

STOLYPIN: The sick man of Europe

Is Putin ill? Is Putin mad? Is Putin about to be toppled by a coup? The rumour mill is grinding on overtime, and although most of the lurid claims are implausible to say the least, they do remind us of Putin's absolute control over the system.

COMMENT: Sanctions are working, but the West risks isolating Russian reformers instead of galvanising them
2 days ago
NEMETHY: Where are US markets? Where are they heading?
3 days ago
COMMENT: Constanta concerns
9 days ago
Sberbank faces a meltdown from its vast commercial real estate loan book
11 days ago
STOLYPIN: The sick man of Europe
12 days ago