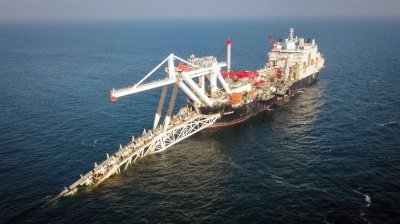 German Chancellor Angela Merkel remains committed to Russian gas pipeline Nord Stream 2, but the US still opposes it, as do the German Green Party that may do well in the September German elections.
By FPRI BMB Ukraine March 25, 2021

These two events nicely summarise the crux of the relationship between Berlin and Kyiv. While Germany is the fourth-largest foreign investor in Ukraine, Merkel’s conservatives have continued to back the Nord Stream 2 pipeline, which Kyiv has always opposed.

At the same time, the Biden administration has taken a strong stance against Nord Stream 2 this past week. Last Thursday, the US Department of State announced that any entity involved in the project should “immediately abandon work on the pipeline” and reiterated that it’s a “bad deal” for Germany and Ukraine.

State Secretary Antony Blinken also emphasised Washington’s opposition on the pipeline during a private talk with Germany’s foreign minister on Tuesday. And the next day he told his German counterpart that there’s a real possibility of the US sanctioning companies involved in the project (RFE/RL).

The way Ukrainian journalist Vitaly Portnikov sees it, Blinken’s statement indicates the US will not soften its attitude towards Nord Stream 2 for the sake of improving relations with Germany (Krym.Realii). On the other hand, economist Alexei Bayer believes that Biden is more interested in repairing America’s frayed relations with Germany than “picking up fights abroad while he has his hands full with domestic issues” (Kyiv Post).

All that said, it’s worth noting that Germany is set to hold a federal election in September. And last Friday, Germany’s second most popular party, The Greens, added plans to abolish the Nord Stream 2 pipeline to their election programme (Reuters). Bloomberg called this development “another risk” for Nord Stream 2, but also noted that while The Greens’ position is firm, it may not be their top priority.