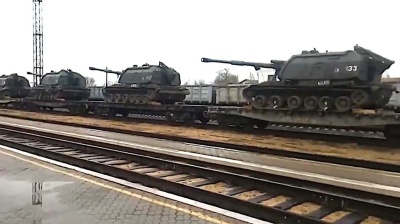 Ukraine has a standing army of 225,000 troops and another 900,000 in reserve. It has invested heavily in its military in recent years and could give Russia a bloody nose if it attacks, but remains seriously outgunned.
By FPRI BMB Ukraine April 20, 2021

Russia’s military exercises near the Ukrainian border have many analysts looking into Ukraine’s capacity to defend itself against a full-fledged attack. And the expert consensus seems to be that while the Ukrainian side is in better shape than it was when the Donbas War began in 2014, it would still be the underdog in this scenario.

As Kyiv-based reporter Dan Peleschuk wrote for Politico, the Ukrainian military today is much better prepared to fight against Russian forces than it was seven years ago, both in terms of combat experience and equipment. Ukraine spent 3.4% of its GDP on defence in 2019, compared with 2.2% in 2014, and it currently has 255,000 active military personnel and another 900,000 in the reserves. Internationally, Ukraine ranks 13th in tanks, seventh in armoured vehicles and seventh in towed artillery.

Be that as it may, the Russian military still outguns Ukraine’s. As Peleschuk notes, in 2019 Moscow spent nearly $60bn more on defence than Kyiv, and Russia ranks first in tanks and towed artillery. Moreover, as defence commentator Yuriy Butusov told Politico, the Ukrainian Armed Forces remain hindered by fundamental organisational difficulties.

According to Kyiv Post defence reporter Illia Ponomarenko, a Russian attack on Ukraine “would be a David-versus Goliath battle ... Ukraine’s military can succeed only if it sheds its old Soviet doctrines and acts like a truly mobile and flexible force, making use of its homeland’s terrain and ensuring swift co-ordination among its elements,” he explained. “If it doesn’t, Ukrainian defences can be destroyed within a few days.”

While Ukraine is currently well-positioned to beat back Russian forces in Donbas, experts told The Guardian’s Moscow correspondent Andrew Roth that Ukraine likely couldn’t manage a war on two fronts if Russian forces were to advance “from Crimea and from the north, where Russia has established a base just 150 miles [240 km] from the border, with tanks, rocket artillery and even short-range ballistic missiles.”

All of that being said, an all-out war between Russia and Ukraine still appears to be an unlikely outcome. As analyst Sarah Lind argued in an article for CEPA, Kyiv has little to gain from “provoking the situation in Donbas.” And Russia’s troop deployments are widely seen as merely an attempt at intimidation. In this context, however, the ball isn’t in Ukraine’s court. As Roth put it: “Whether [the build-up] is merely an attention-grabbing feint or a prelude to an escalation will depend on the Kremlin’s will.”